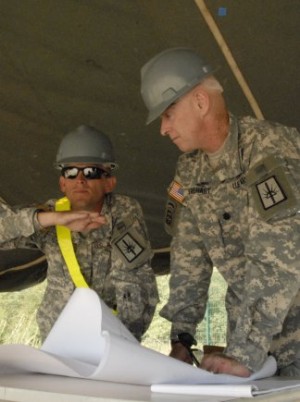 HOHENFELS, GERMANY-- Lt. Col. James Freehart, the commander of the 204th Engineer Battalion from Bighamton, N.Y. is briefed by Lt. John Scott, the officer in charge of construction with the 827 Engineer Company from Chester, N.Y. at the Joint Multinational Readiness Center here August 15, 2012. Seventy-eight New York Army National Guard Soldiers with the 827th and 152nd Engineer Companies from the 204th Engineer Battalion traveled to Hohenfels as part of their annual training August 4-25 to aid in troop construction projects on the base’s pre-deployment training area.

HOHENFELS, GERMANY--- The crunch of ten-ton vehicles on gravel and the din of voices over radio calls can be heard as New York Army National Guard Soldiers carry out their annual training at the Joint Multinational Readiness Center (JMRC) here.

Seventy-eight Soldiers with the 827th and 152nd Engineer Companies from New York’s 204th Engineer Battalion from Walten, traveled to Hohenfels to assist and chip away at troop construction projects (TCPs) August 4 to 25, 2012.

"Our mission here in Hohenels is to aid in TCPs in order to improve the realism of training areas for Soldiers participating in overseas deployment training," said Capt. Chad Clark, the commander of the 827th from Chester, N.Y.

At the JMRC in Hohenfels, units conduct pre-deployment training in authentic environments that mirror the setting and culture of Soldiers’ deployment destinations. Features of the Center include a helicopter landing zone to transport Soldiers to and from training areas within Hohenfels, realistic villages occupied by experienced actors imitating citizens, and various other logistical facilities.

One of the goals of the two engineer companies throughout the duration of their training involves building upon the site’s preexisting helicopter landing zone (HLZ). The Soldiers will work to raise the elevation of the HLZ two and a half meters, in accordance with training needs.

Additionally, the 827th and 152nd will work to lay foundations for logistical facilities that future units deployed to Hohenfels will build upon and integrate into upcoming training missions.

"All of our projects are supporting units who will deploy," Clark said. "We’re creating buildings for them to utilize, and improving the landing pad that they will utilize during their pre-mobilization training."

Although the members of the 204th Engineer Battalion will only remain in Hohenfels for a couple of weeks, the projects they are undertaking are ongoing and will involve many more hours of manpower before they are completed. Additional units will be sent to Hohenfels for up to two years before the HLZ and buildings are finished.

"The work we’re doing here is laying the footprint so future units that come in will have a good idea of the work that we’ve done, and the work that still needs to be done," said Lt. John Scott, the officer in charge of construction with the 827th from Albany.

According to Scott, the progress on the landing zone and logistical facilities should be 33 percent complete by the time the engineer companies depart Hohenfels, thanks to the work of the current engineers on site and those who came before them.

"Our sponsors and advisors have been ecstatic with the work we’ve done," said Clark. "They say that we’ve really embraced the concept of this pad. And as for our guys, they’ve jumped right in and have made great strides in getting it to where we want it to be."

When it comes time for the engineer Soldiers to depart Hohenfels and head back home, their time spent overseas will definitely be a time to remember.

"It’s definitely been a plus to be doing our annual training away from the drill shed floor at home," said Pvt. Jean Thompson, an equipment specialist with the 827th from Almond, N.Y. "But we, like many other units that will come in after us, are just here to chip in a little bit until the project is done."