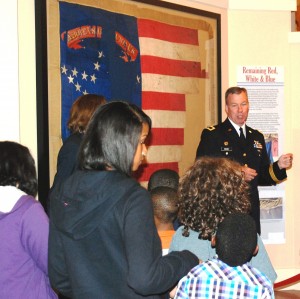 ALBANY--New York Army National Guard Brig. Gen. Michael Swezey, commander of the 53rd Troop Command, speaks with students during a ceremony opening a historic Civil War battle flag exhibit at the State Capitol on Wednesday, Sept. 18. The exhibit “1862: Red, White and Battered “ displays the historic flags that the Division of Military and Naval Affairs holds on behalf of the state of New York. The Office of Parks, Recreation and Historic Preservation has been working to preserve the historic flags.

ALBANY-- Nine historic Civil War battle flags which tell the story of New Yorkers in battle during 1862 are now on display at the State Capitol here.

The display includes battle flags carried by a Medal of Honor winner at the Battle of Antietam, the bloodiest day of the war, on Sept, 17, 1862; and another carried at Second Bull Run on August 28, 1862 by the regiment with the highest number of soldiers killed in any Federal regiment in any single battle of the Civil War.

“These flags will remind New Yorkers who visit the Capitol about the heroism of our Soldiers in the Civil War,” Swezey told a group of school children visiting the exhibit. It’s important to understand history to chart a course for the future, he said.

“These historic flags truly bring home the sacrifice made by soldiers going into battle, and their display in the State Capitol is another example of how Governor Andrew Cuomo is bringing New York’s incredible and important history directly to the people,” said Rose Harvey, Commissioner of the Office of Parks, Recreation and Historic Preservation (OPRHP). “I am tremendously grateful to the Colby Foundation and individuals and organizations who have partnered with New York State to make this exhibit possible.” Cuomo is emphasizing New York’s history in the state’s tourism promotion materials and has made a point of displaying historic items in the Capitol and other state buildings. “This is a fantastic display and I’m pleased that Governor Cuomo has made room in the Capitol so that visitors there can learn about our military heritage,” said Major Gen. Patrick Murphy, the Adjutant General of New York.

Two displays in the Capitol include artifacts from the New York State Military Museum, which is administered by the New York State Division of Military and Naval Affairs. New York has the largest collection of more than 2,000 battle flags and 500 have been conserved by experts with the OPRHP. The exhibition will run on the first floor of New York State Capitol through spring of 2013. It is taking place thanks to a combination of a $22,000 grant from the Coby Foundation, a New York City organization that funds projects in the textile and needle arts, and approximately $8,100 in donations from private citizens. The exhibition includes a video component, “Conservation on Camera,” that examines the regimental color carried by the 16th New York Volunteers from St. Lawrence, Clinton, and Franklin counties. When presented with the color in 1861, the regiment vowed to defend the flag at all costs, a patriotic promise made during the build-up to war. The North Country soldiers kept their word through two blood-filled years. The video examines the flag’s unusual construction as well as the treatment of its painted emblem. Other components of the exhibit include specially developed lesson plans (posted at http://dmna.ny.gov/historic/btlflags/exhibits/1862RedWhiteandBattered.htm) and free monthly guided tours of the exhibit, on the first Thursday of each month from 5:30 -- 6:30 pm, from September 2012 -- June 2013.

The flags on display include:

The Silk Regimental Flag of the 9th New York Volunteer Infantry presented to Governor Theodor Roosevelt by veteran of the regiment in 1899;

And a flank marker carried of the 55th New York Volunteer Infantry Regiment owned by Colonel Philippe Regis de Trobriand, regiment’s colonel and presented to Gov. Nelson Rockefeller by his great grandson in 1960.

The display builds on the recent renovation of the New York State Capitol, which includes hundreds of newly installed displays relating to New York State’s social, technological, and political history. The Hall of Governors now includes identifications of each past Chief Executive, together with the dates of their service. A timeline of state history has been etched on the walls of the Second Floor, where the Governor’s office is located. Since 2000, the New York State Battle Flag Preservation Project, a collaboration between the New York State Office of Parks, Recreation and Historic Preservation and the Division of Military and Naval Affairs, has conserved and properly stored over 500 of the state’s 2,000 flags carried into battle by New York State regiments.