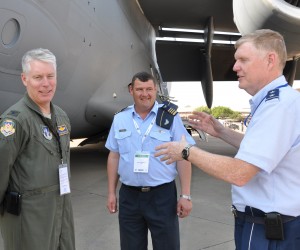 But on Thursday, Sept. 20, he took a turn as a tour guide, showing off one of the 105th’s C-17 Globemaster III cargo planes to South African Air Force person and dignitaries visiting the Africa Aerospace and Defense Airshow and Exhibition at the South Africa National Defense Force’s Waterkloof Air Force Base. “As the former commander, I signed for tail number 105 when we accepted it, so I’m delighted to be here to show this aircraft off to our South African Air Force counterparts,” Johnston said.

The C-17 and crew are here as part of a U.S. military contingent displaying aircraft and equipment. “As we complete the conversion from C-5’s to C-17’s, it’s great to see this aircraft out in the world representing American technology for international forces and industry to see,” Johnston said.

According to Johnston, the airshow isn’t just about showing off equipment capabilities. It’s the interaction between service members that has been the highlight for many.

“The Air Force has many commonalities and this has been an opportunity to strengthen the very positive relationships we have built with New York,” said Col. Jurgens Prinsloo, commanding officer of the South African Air Force 28th Squadron.

“This visit has allowed us to discuss future opportunities to work with New York to learn from each other,” Prinsloo said.

The C-17 crew also enjoyed showing off the aircraft and sharing their unit’s capabilities with several local students attending the exhibition.

“It’s great having the aircraft here and being able to provide a visual, since many of these kids have never seen this aircraft,” said C-17 loadmaster Senior Master Sgt. Jerry Ingram from Poughkeepsie, N.Y.

“I hope we are making a positive impression and providing a different perspective on future aviation career opportunities for these young kids,” Ingram said.