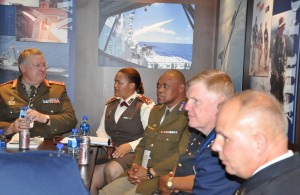 Representatives from the New York National Guard took advantage of being at the Africa Aerospace and Defense Airshow and Exhibition to meet with their counterparts from the South African National Defense Forces.

“New York’s partnership has been strengthening over the past nine years, and meeting face to face is an important aspect to continue building these relationships,” said Col. Franz Michel, who oversees the State Partnership Program.

“We have built a strong relationship with New York and having these personal meetings allows us to plan for future opportunities.”

“This interaction is very important. Meeting in person and establishing a level of trust and respect allows us to be effective,” Andersen added.

The State Partnership Program is a National Guard initiative that encourages relationships, enhances international security and builds capacity across all levels of society with developing nations. Each State and territorial National Guard is partnered with the military of a developing friendly nation.

Participation in this air show is part of the New York National Guard’s on-going relationship with South Africa.

The air show is hosted every two years and is comprised of nearly 60 civilian and military aircraft and vehicle demonstrations from some of the biggest names in aviation and the defense industry.

In addition to sharing aircraft and equipment capabilities, the meeting participants discussed several areas of interest, to include the New York National Guard’s emergency management capabilities and reintegration programs.

“We have found the National Guard’s resiliency and Yellow Ribbon programs to be exceptional and we wish to model these initiatives,” Andersen said.

Identifying the interest and recognizing the mutual benefit, New York has invited representatives to meet with program experts in the future.

“Based on these meetings, our plan is to get our folks together to advise and help them develop a program that meets their specific needs,” Michel said.

“Our primary focus is identifying future training opportunities that will benefit both our services,” said Major Gen. Verle Johnston, commander of the New York Air National Guard. “I’m pleased that we were able to accomplish this.”