September 17, 2021 | 4:15 pm COVID-19 Vaccines
On August 23, the FDA announced the full approval of the Pfizer-BioNTech vaccine for the prevention of COVID-19 disease in individuals age 16 and older. Read more.
Details

Employers get "a bucket list" day from Guard-sponsored racing team 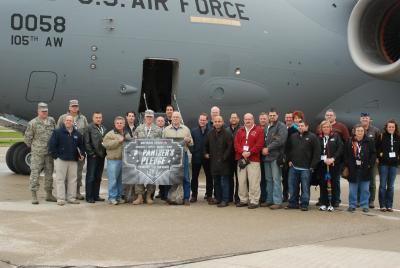 INDIANAPOLIS-It was rainy. It was cold. It was grey.

But 27 representatives of Albany area companies said they had a great day as they flew in a New York Air National Guard C-17, learned more about National Guard capabilities, and even got a spin around the Indy 500 race track at 100+ miles per hour.

“I truly had a “bucket list” day,” said Tammy Crawford , a hiring manager with DA Collins Companies in Wilton.

The unique Employer Support of the Guard and Reserve “Boss Lift” on Friday, Oct. 19 was made possible by Panther Racing, the Indianapolis based racing company which fields a New York Army National Guard-sponsored car in the Indianapolis 500 and other events on the Indy car racing circuit.

As part of the sponsorship deal, Panther Racing hosts Boss Lifts events for employers from around the country.

Boss Lifts, in which employers get to see Guard Soldiers and Airmen in action, are one of the best ways for ESGR to tell the story of the Guard, said retired Command Sgt. Major John Willsey, an ESGR contractor.

This ESGR event was unique because the participants got to travel out of state -- on a 105th Airlift Wing C-17 -- and because it was hosted by a commercial enterprise.

His team is also happy to host employers at ESGR events so he can personally emphasize the importance of giving jobs to members of the Army and Air National Guard who need them, Barnes said. Guardsmen are smart and dedicated workers, Barnes said.

A wounded National Guard veteran who is confined to a wheelchair is one of his best workers, he emphasized to the New York employers.

The Capital Region employers day began at 5 a.m.-just like it does for Guardsman, Willsey told them-and ended after 7 p.m. They experienced a two hour ride on a GSA bus, a flight in a C-17 Globemaster III, including a visit to the flight deck, and had a chance to get hands on with gear used to respond to a chemical, biological, or radiological incident.

At the Panther Racing building the employers were briefed on the National Guard’s CERFP-CBRN Enhanced Response Force Package-got a chance to look at Indiana National Guard equipment, and also heard from Major General Martin Umbarger, the Adjutant General of Indiana.

Gen. Kevin Bradley, who escorted the employers on the trip, also spoke about the important role having a good job plays in letting Guard members serve.

JR Hildebrand, Panther Racing’s driver who finished second in the 2011 Indy 500, emphasized how much he’s learned from the National Guard Soldiers and Airmen he’s met because of Panther’s relationship with the Guard. He’s met Soldiers who have been in desperate combat and that’s a humbling experience, Hildebrand said.

“The presentation was excellent and was delivered loud and clear,” said Bill Lia, president Albany’s Lia Auto Group. “I was certainly surprised at some of the numbers regarding the number of unemployed and underemployed Guardsmen.”

After the presentations the employers visited the Indianapolis Motor Speedway, where each person got a chance to go around the 2 and a quarter mile track twice in a car driven by a professional race car driver. At speeds hitting more than 115 miles per hour, but far less than the 230+ that the Indy cars normally drive, the Capital Region employers got a taste of what it’s like to negotiate the track for real.

The National Guard has a very powerful message, said Michael Keegan, the President of the Hudson Valley Division of M &T Bank. Putting employers on a National Guard plane so they can see the Air Guard in action, and exposing them to some positive stories while giving them a unique experience like riding in a race car, really drives that story home, Keegan said.

“There is a much greater chance that the participants will talk about and relay the information to other people. Having started the day not knowing much about the National Guard, planes or cars, I certainly learned a lot,” she added.