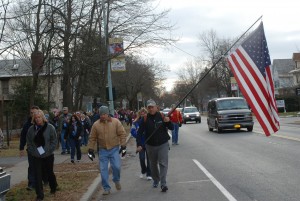 GLENS FALLS, N.Y. - New York Army National Guard Soldiers, families, friends and supporters from the community march in the the 9th annual Christmas Eve roadmarch. The march is a tribute to all military personnel serving away from home for the holidays this year. U.S. Army photo by Col. Richard Goldenberg, New York National Guard. (RELEASED)

GLENS FALLS, N.Y. -- Nearly 1,000 New York Army National Guard Soldiers, family members, friends and members of the Glens Falls community turned out Christmas Eve for the 9th annual road march to support the troops. The march, coordinated by retired Sgt. 1st Class Art Coon and his wife Julie, is sponsored in part by the Capital District of New York Chapter of the Association of the U.S. Army and has ties to Army Soldiers serving around the world. First conducted in 2003 when Soldiers of the locally-based New York Army National Guard’s Company C, 2nd Battalion 108th Infantry were deployed in Iraq over Christmas. Other Soldiers assigned to their home armory in Glens Falls, from the 466th Area Medical Company, got together to conduct a road march in their honor. For that first march, Coon had only a couple dozen Soldiers or family members to participate. They shared images with the troops in Iraq as a reminder that families and fellow Soldiers would remember the troops sacrifice at Christmas time. “The heart of the road march is that we are here to show Soldiers who are not home at Christmas, that even though we could be home right now, we are here to show we remember them,” Coon said in his remarks to the attendees before the road march began. “I always call it shared suffering, so today we suffer just a little bit for those who cannot be here.” "We remember them at a time when we could be comfortable in our homes, wrapping presents," Coon said. "We take a little bit of our time to suffer along with them and sacrifice." For 2012, marchers who registered in advance received a lanyard where they can write the name of those they’re honoring for troops overseas, or remembering past veterans. Others were provided lanyards bearing the names of area Soldiers serving in Afghanistan or past veterans of the area. “We are using lanyards for this march to show everyone who you are marching for,” Coon said. “We get to see all the stories, from a lanyard for a Civil War Soldier to Soldiers killed in Vietnam and Iraq to Soldiers currently deployed to Afghanistan,” Coon said. Coon’s lanyard was especially personal. As the former recruiter for the region, his lanyard carried the names of Soldiers killed overseas, Soldiers that he recruited into the National Guard and helped mentor their military careers. Julie Coon, a long-time supporter of the National Guard’s Family Readiness Program in the area, stressed the importance of families and friends participating. "When I have a phone call from a mom who says ’this is my daughter’s first year in Afghanistan and I don’t know what to do, I want to come,’ that’s all it is. Everybody’s here for the same reason," she said. The march, in its nine years, has created its own momentum, exporting the road march tradition to areas where troops are serving. Chief Warrant Officer Ryan Comstock, serving in Afghanistan with a UH-60 Blackhawk battalion, had marched for years in support of fellow Soldiers, including his older brother Ken, who served and was wounded in Iraq in 2004. Comstock, a helicopter pilot serves with an Idaho National Guard aviation unit in Afghanistan, organized a companion march for about 45 fellow Soldiers. Those troops set off at 5 a.m on Christmas Eve in theater in order to send digital photos back to New York to motivate the crowd of more than 925 participants in Glens Falls. Last year, other regional New York Army National Guard members modeled their march while deployed to Guantanamo Bay, Cuba. The goal for both Art and Julie Coon for the 10th anniversary road march in 2013 will be 1,000 participants. “Wouldn’t that be great?” Art Coon said.