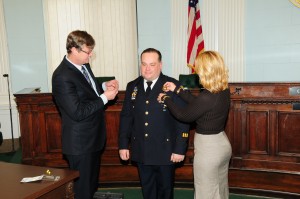 He has been with the department for 17 years and will replace retiring John Chella who has served 40 years on the job.

“DalPorto’s military experience played a big part on my decision for promoting him to superintendent.” said Paul Dyster, Mayor of The City of Niagara Falls.

Major DalPorto joined the 107th in 1997 in the security police flight an enlisted airman.

He received his commission as 2nd Lt in 1998 and served as Public Affairs Officer and Military Equality Officer. In 2008 he deployed to Iraq serving as the Executive Officer of 447th Expeditionary Group in Iraq, He became the commander of services upon his return and in 2011 assumed command of the 107th Force Support Squadron.

“I’m excited and humble on receiving this position.” said DalPorto “I will do my best for the citizens of Niagara Falls”

DalPorto’s law enforcement career has an impressive background. He joined the Niagara County Sheriff’s Dept and then became a patrolman for Niagara Falls in 2006. He was promoted to Detective and worked in the Narcotics Intelligence Division and also served on the department’s Special Weapons and Tactics (SWAT) Team as a leader and trainer, academy instructor. DalPorto was promoted to Lieutenant in 2008 and assigned to the patrol division and was later promoted to Detective Lieutenant assigned to Community Relations/ Police Administration and then was transferred to the Narcotics Intelligence Division.

He has also served as the department’s Public Information Officer.

“He approaches all leadership challenges with an open mind; a true inspiration to all.” said Col. Timothy Vaughan, 107th Mission Support Group Commander. “His leadership experience and skills from the Air National Guard will be an asset to the Niagara Falls Police Department.