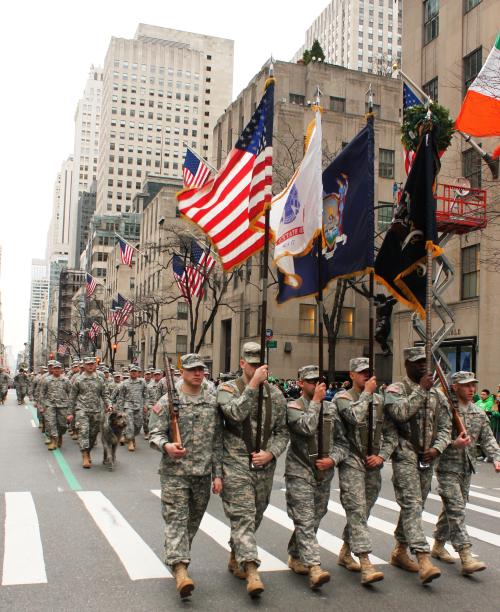 NEW YORK--Troops of the New York Army National Guard’s 1st Battalion, 69th Infantry marched at the lead of the New York’s St. Patrick’s Day Parade this year, just as they have since 1851.

The march up Manhattan’s 5th Avenue marked the highlight of a tradition suffused in the history of one of the National Guard’s most storied units.

Each Soldiers in the 750-person formation marched with the stories of the past -- the tales of valor in the Civil War, World War I, World War II, and the War on Terror -- living on in each tradition kept.

"Every aspect of the day is steeped in tradition which relates to either the Irish Catholic beginnings of the regiment or the history since then," said Lt. Col. James Gonyo, the battalion’s commander.

The history of the 69th was especially impressive to him, said General Frank, the Chief of the National Guard Bureau, and a guest marcher in the parade.

"I don’t know anything like this," Grass said, "the traditions you are connected to, your roots." The history of the 69th runs from the Civil War to Afghanistan and the traditions continue to grow, Grass said.

A gold cross hung on Gonyo’s chest as he marched, next to a sprig of boxwood.

A Soldier does not normally wear a religious icon outside his uniform, but this cross was once worn by poet Joyce Kilmer--the author of the poem "Trees"--who died while serving in the 69th in World War I. Today it is handed down from battalion commander to battalion commander.

The sprig of boxwood was worn by all Soldiers of the 69th, as a reminder of the regiment’s charge against Confederate lines at the Battle of Fredericksburg during the Civil War. The Soldiers of the Irish Brigade wore green on their blue uniforms that day so nobody could forget their heritage. It was their ferocity at Fredericksburg that led to their nickname, coined by Confederate Gen. Robert E. Lee, "the Fighting 69th."

The unit’s leaders traditionally carry Irish fighting sticks made from the Irish Blackthorne tree tucked under their arms during the parade.

During an early morning toast with Irish whisky -- another tradition -- Gonyo explained that these traditions are taught to young soldiers as a way of conveying that their history has meaning, something to be proud of, something to live up to.

The unit is no longer a predominately Irish unit, but every member becomes an honorary Irishman. This way, as Father Duffy, a key figure in the unit’s history, describes: "They are Irish by adoption, Irish by association, or Irish by conviction."

As Gonyo marched at the front of the parade, he was flanked by the regiment’s honorary bag piper, who played the unit’s regimental song, "The Garry Owen."

The bagpipes, as well as the two Irish wolfhounds accompanying the Soldiers and the annual mass at St. Patrick’s Cathedral, were a reflection of the unit’s traditional Irish heritage.

Monique Seefried, president of a French foundation that created a memorial for New York National Guardsmen who fought in World War 1, remarked that she was incredibly moved by seeing the Soldiers enter the cathedral.

"You see their flag with all the battle ribbons [earned by fighting in various battles], and that was something that was incredibly moving," Seefried, head of the Croix Rogue Farm Memorial Foundation, said.

Seefried said the parade reminded her of what her French relatives must have felt upon seeing American Soldiers arrive to assist them. "To see the flag enter through the cathedral with the men, and to be seated there and to be just part of this mass was an incredible event," she said.

"The Army is steeped in history, but the 69th is steeped even deeper," said Air Force Master Sgt. Theodore Speiss, a guest marcher for the day. "The history is all over the walls of the armory."

Speiss’ Air National Guard unit, the 213th Engineer Installation Squadron, was invited by the 69th to march in the parade as result of working together during the response to Super Storm Sandy.

Following mass, the battalion marched to 44th Street and 5th Avenue, the official start of the parade. There, they marched up 5th Avenue to the end of the parade route, where a special subway train picks them up and transports them to the 28th Street Subway station.

The battalion’s officers lined the front steps of the 100-year old armory as the soldiers, led by their NCOs, marched through and into the drill hall, where they ate corned beef and cabbage and hosted Gen. Frank Grass, the chief of the National Guard Bureau.

"I saw the commanding officer telling the soldiers the tradition, what they stand for, I saw that that was very good," Seefried, who has a PhD in history, said. "There is no way to ignore the history of the 69th. All the walls are covered with history."

It was a sentiment echoed by Jeanne Eickhoff, another guest of the 69th. Eickhoff, an artist writing a novel about characters that fight in the 69th, walked along the parade route at the invitation of Gonyo to learn more for her book.

"I think it’s wonderful that people are keeping the traditions alive," Eickhoff said. "This city really wraps its arms around the unit. They just really love this regiment and the spirit that it embodies. You could just see it in their faces, the pride. The love that people were giving back.

"And that’s what I learned today," she said. "The spirit is still alive."