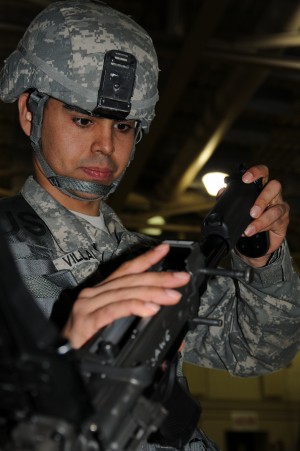 Sgt. Ivan Villanueva of the 442nd Military Police Company and native of Deer park, N.Y., represented the 369th Sustainment Brigade during the 2013 New York Army National Guard’s Best Warrior Competition held here, March 23-24, 2013. Here he works on assembling and disassemblying an M249. Fourteen Soldiers and NCO’’s representing all the major commands in the NYARNG gathered to compete for top homors in three categories: AGR of the Year, NCO of the Year and Soldier of the Year. The NCO and Soldier of the Year go on to compete at the Regional Competition to be held at the Camp Smith Training Site, Cortlandt manor, N.Y., May 14-17.

Staff Sgt. Jimsey Roberts, the Readiness NCO for the 719th Transportation Company was named Active Guard and Reserve NCO of the Year.

They joined 11 other Soldiers and Non-Commissioned Officers, representing the major New York Army National Guard commands, in pitting their skills against one another to win the title of “Best Warrior” during the two-day event.

During the course of the competition, this years’ competitors first had to successfully pass a diagnostic physical fitness test, then negotiate several hands on tasks ranging from maintaining an M249 machine gun to evaluating a simulated battlefield casualty and then finished up with an appearance in dress uniform before a panel of three Sergeants Major where they were subjected to questions covering a range of topics that include military history, customs and courtesies, Army policies, field manuals, and regulations.

“It feels great to win at this level and I’m really proud to not only have competed here but also to have won. It feels really good,” said Colliton, a native of Amsterdam, N.Y. “I was looking for that next challenge so I signed up,” added Colliton. “I just got back from a deployment and wanted to keep charging forward.”

Colliton also added that he looks forward to representing the state at the next level and has hopes he will do the same at the national competition.

Blanchette, who works full-time as the Long Island coordinator for the New York Military Forces Honor Guard , echoed Colliton’s excitement in winning. The key to getting that winning place is hard work, she added.

“Study, study, study, a lot of studying,” said Blanchette. “My Readiness NCO encouraged me to go as far as I could and my squad leader helped me out a lot with the performance tasks.” Roberts, also gave a little advice for future competitors.

“If you are going to do it, give it a 100%’” said Roberts, a native of Newark, N.J. “Don’t just go through the motions. It’s a very prestigious opportunity that only a few get so be proud of it.”

“Be motivated, be hungry, and really want it. Come here to win,” added Colliton.

“You are representing your organization at a high level and by doing so you not only put yourself on the map but also your brigade, your battalion, and your unit,” said Roberts.

“Everybody over the next few months will be talking about the NCO from the 369th that won AGR of the Year,” he added.

“I think it was a fantastic competition,” said Wicks. “I think the candidates were well qualified and that the brigades sent the right people to the competition. They all did a great job,” he added.

“I want to continue to model it after the regional competition because that’s really going to help set our Soldiers up for success,” Wicks said.

“I think our chances [of winning at regionals] are outstanding. I’d be surprised if we didn’t take one or two of the regional slots,” Wicks added.