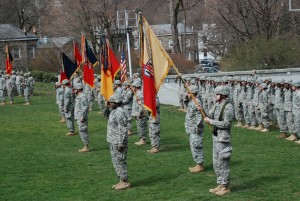 WEST POINT, N.Y. --- New York Army National Guard Brig. Gen. Harry E. Miller took command of the multi-state 42nd Infantry Division during a formal change of command ceremony here April 13, 2013. Outgoing commander Maj. Gen. Steven N. Wickstrom passed a guidon donned with traditional divisional colors at the United States Military Academy’s Trophy Point Ampitheatre, representing the transition of command. Wickstrom assumed command of the 42nd ID in May of 2009, and led the division in assisting civilian authorities with the devastation resulting from myriad natural disasters over the years, including Hurricanes Irene and Sandy in 2011 and 2012, respectively. “Maj. Gen. Wickstrom led the Division during one of the most complex and difficult time periods in all of its history,” said Miller. “For that, he should be commended.” Wickstrom was commissioned as a second lieutenant upon graduation from the United States Military Academy in 1981, and served primarily with infantry units in both the Active Army and the Army National Guard since then. In addition to retiring his role as 42nd ID commander, he retires from military service at the close of April. “Today I joined the ranks of former 42nd Infantry Division commanders who led and served a wonderful group of Soldiers,” said Wickstrom. “It is because of the great work of the Soldiers in this division that I can stand proud in such company and hold my head high. I extend my greatest trust to General Miller to carry on the legacy of this great division.” As former Senior Commander of Fort Drum, incoming commander Miller knows a thing or two about taking care of Soldiers. During his time at Fort Drum, he was responsible for the readiness, safety and well being of over 38,000 Soldiers, families and civilian employees. As commander of the 42nd ID, he assumes command of approximately 20,000 Soldiers assigned to the 50th Infantry Brigade Combat Team in New Jersey, the 86th IBCT in Vermont, the 197th Fires Brigade in New Hampshire, the 26th Maneuver Enhancement Brigade in Massachusetts, and the 27th IBCT, 42nd Combat Aviation Brigade and 369th Sustainment Brigade in New York. “General Miller is incredibly qualified to take over the division,” said Maj. Gen. Patrick A. Murphy, the Adjutant General of New York State and reviewing officer for the change of command ceremony. “I look forward to seeing leadership taken into the next phase.” The 42nd ID first organized in 1917 and deployed for combat service in World War I, World War II and Operation Iraqi Freedom. In addition to participating in the multiple wars fought, the division served integral roles in aiding first responders when the World Trade Center was attacked in 2001, and in aiding civil authorities as they dealt with major natural disasters over the years. “Not only do I want to keep our division combat ready, but I want to make sure we are fully capable of supporting civilians in our homeland,” said Miller. “I’m truly honored, humbled, and appreciative to have been trusted with the task.”