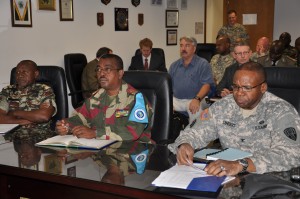 The Guard Soldiers joined with 11 officers from eight partner nations and organizations to share lessons learned at a conference conducted by the U.S. Army Africa.

"This is an opportunity to look at what we accomplished earlier this year and improve on the processes we used," said Jerry Madden, U.S. Army Africa planning officer for Central Accord 14.

Central Accord 14 will build on the specialized skills shared in areas of command and control, logistics movement and medical evacuation, both on the ground and in the air and strengthen the international relationships and partnerships that developed throughout Central Accord 13.

During Central Accord 13, in February 2013, the 369th sent a small team to conduct reception and staging operations for the participating nations.

The 369th will have a significant role in the 2014 exercise because of their specialized skills and their success working in Africa, specifically, Sanders said.

The unit’s prior experience in Mali and Cameroon --369th Soldiers deployed to Mail 2012-- and their proven ability to move, supply and maintain troops in austere regions around the world is also key, he added.

"We bring unique qualifications and expertise in sustainment operations to the U.S. Army Africa team in Central Africa," Sanders said.

"Our focus as we move into the exercise is learning our partner nations’ culture and processes and how these impact how they conduct operations," Sanders explained. "This knowledge allows us to quickly form effective teams and increase working relations with our nation partners."

The 369th plans to send 70 Soldiers to Cameroon next year to participate in the exercise training alongside African military forces.

The 369th will train alongside Cameroon and partner nations’ personnel to receive, stage, move and supply roughly a thousand military personnel from several countries expected to train in Central Africa for 3 weeks in early 2014.

U.S. Army Africa will use this as an opportunity to share expertise and experience of all participating forces, from the command to individual Soldier level. "It’s important to begin the planning process early to identify how each nation operates in the areas of logistics, communications and operational command and control at both the tactical and strategic levels," Madden said.

"Because each country’s military works differently, identifying these aspects early will help bridge gaps between all partner nations and address these issues prior to the exercise," Madden added.

The 369th Sustainment Brigade, headquartered in Harlem, New York City, traces its history back to the 369th Infantry Regiment, an African-American unit which fought in World War I. The regiment earned more French Croix de Guerre medals than any other American unit and became known as the "Harlem Hellfighters."