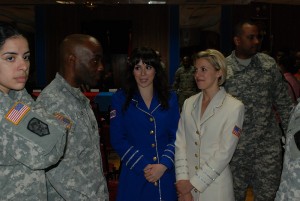 NEW YORK -- The "Liberty Bells" of the NYC USO speak with Soldiers following their mobilization ceremony. 27 members of the New York Army National Guard’s 27th Finance Company said goodbye to friends and family at the unit mobilization ceremony at the American Legion Post 131 in Whitestone on Friday, May 10 as the Soldiers prepare to leave for a deployment overseas. The Soldiers will conduct predeployment training at Joint Base Mcguire-Dix-Lakehurst in N.J. and are expected to redeploy home in the spring of 2014. U.S. Army photo by Col. Richard Goldenberg, NY National Guard Joint Force Headquarters (Released).

NEW YORK ldquo;New York Army National Guard leaders, families and friends of the 27th Financial Management Company gathered at the American Legion Post 131 in Whitestone here May 10 to farewell 27 Soldiers for duties in support of Operation Enduring Freedom. The mobilization of the 27th Finance, the second overseas callup for the unit in the past five years, supports commanders overseas with financial service support for U.S. and multinational forces with pay, travel services, fund disbursements, contract payments and accounting, commercial vendor services and the automation and internal controls to account for U.S. funds of overseas contingency operations. “I thank these brave Soldiers for their immeasurable dedication and commitment,” Governor Cuomo said in a statement. “The long periods away from home can be difficult for Soldiers and their families but they understand the role of protecting our freedom. Do your duty, make us proud, and come home safe and sound.” Representing Governor Cuomo at the mobilization ceremony were Maj. Gen. Patrick Murphy, The Adjutant General and Assistant Deputy Secretary for Public Safety Mary Kavaney. “It certainly is true that families don’t enlist, but they endure deployments,” Kavaney said to the assembled Soldiers and their families. “I admire what you are about to embark upon and I thank you for your sacrifice for other New Yorkers, others in our country and for your self-sacrifice.” The company will conduct predeployment training at Joint Base McGuire-Dix-Lakehurst before serving overseas as the senior financial headquarters for two other finance detachments. “I know that your leadership team is well trained and that you are ready to go,” Murphy said. “Our finance units are among the most deployed units, even though you are not large in numbers, you are critical to the mission.” The unit, while preparing for the this mobilization for the past year, also served locally after the state callup of forces following Hurricane Sandy. Members of the finance company assisted the state payroll processing for some 4,500 Soldiers and Airmen performing state active duty. “The presence of this team did outstanding work during Sandy,” said Col. Reginald Sanders, the commander of the 369th Sustainment Brigade. “You made a difference.” The company last deployed in 2008-09, providing mission support in Kuwait and Iraq. Several of the company’s NCOs served on that deployment, providing leadership experience for the unit’s current deployment. Lt. Col. Dan Harris, battalion commander of the 369th Support Battalion, addressed the unit leadership, Capt. Erica Poole and First Sgt. Eric Wimberly, encouraging them to focus not on the financial work ahead, but the command responsibilities of the company. “Lead them,” Harris said. “Command this company and make decisions. They are yours and this is yours to do.” “To the Soldiers, you are ready,” he continued. “You are set and ready to do this mission.” The company expects to train for approximately 45 days in New Jersey before deployment overseas and should return home in about one year. “Thank you for the love and support,” said Capt. Erica Poole, the unit commander to the group of families, supporters and military leaders. “We can’t do our mission without you.”