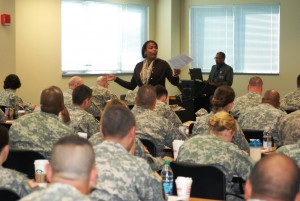 So is Master Sgt. Pete Towse. And so are 49 other members of the New York Army National Guard, along with eight National Guard leaders from Oklahoma, Connecticut, North Dakota and Minnesota.

The 59 officers and Non-Commissioned officers are learning to change their unit cultures as part of a two-week, 80 hour program of instruction known as SHARP training for Sexual Harassment/Assault Response and Prevention.

"The main goal of this is to train advocates in the units--we call them change agents," said Master Sgt. Richard Cumberbatch, the New York Army National Guard Equal Opportunity NCO. "They are the ones who will go back and help their commanders change the culture of their units."

"Sexual harassment and assault is a serious issue in the military," said Towse, the public affairs NCO for the 42nd Infantry Division. "It is possible though this training that I can change attitudes."

"We are basically training them to see what right looks like so when they go back to their units they can look at the stuff that is not in compliance with Army policy and make changes," Cumberbatch said.

The participants learn to do this by using intervention techniques and also by setting an example.

The Army requires SHARP-trained officers and NCOs in each brigade or battalion. The New York Army National Guard has decided to place SHARP-trained leaders in companies which are located in isolated armories as well, Cumberbatch said.

The goal for the New York Army Guard is to have 120 SHARP-trained professionals. The total now is 116 but maintaining the level means continually training more people, Cumberbatch said.

This is the second time New York has hosted a class as it works to maintain its goal.

Sexual assault is a crime and is defined as "intentional sexual contact, characterized by use of force, physical threat or abuse of authority, or when the victim does not or cannot consent." Obviously this means rape, but it can also mean "aggressive touching" Cumberbatch said.

Sexual harassment is two things. It can be a demand to provide sex for favorable work actions, which most people would clearly see is wrong, Cumberbatch said.

But sexual harassment also occurs "when a person is subjected to offensive, unwanted, and unsolicited comments and behavior of a sexual nature that interferes with that person’s work performance or creates an intimidating, hostile or offensive working environment," according to the Army. Sometimes Soldiers may not realize that what they consider workplace banter, meets this criteria, Cumberbatch said.

Half-way through the 80-hour class the key thing she had learned, said Guckian--an instructor assigned to the 106th Regional Training Institute--was the need for intervening at the lowest level to change behaviors.

"They are focusing in the class about not being a bystander," she said.

Guckian, a resiliency and suicide prevention instructor, said that a big part of the dealing with sexual harassment in the military workplace is to make people more confident in speaking up about things that make them uncomfortable. What one person considers sexual harassment another individual may not, she said.

The SHARP training the National Guard Soldiers receive is the same training program delivered to Active Component Soldiers around the world, said Nancy Mathis, a retired Army sergeant major, who is a contract instructor for the course. There are differences and so she and her fellow instructors do try to cover those issues, she said.

For example, a sexual assault on an Active Army post would be handled through the Uniform Code of Military Justice and through the Army Criminal Investigation Division. At a National Guard unit local police would be called. Guard units deal with sexual harassment through equal opportunity channels while on active duty those complaints would fall to the Sexual Assault Response Coordinator, Mathis said.

Another interesting thing when instructing Guard Soldiers, as opposed to Active Duty Soldiers, is that many of the Guard Soldiers are in law enforcement and they bring a hands --on perspective to sexual assault issues, Mathis said.

The dispersed nature of National Guard service, with Soldiers located in small numbers across New York, can make it harder to deal with sexual harassment and sexual assault, Cumberbatch said. The New York SARC works hard to link Soldiers up with civilian providers when necessary, he said.

The bottom line is that even if it is only a part-time job for many Soldiers, the armory is still a workplace, Cumberbatch said.

"When it comes to drill you respect your fellow Soldiers," he emphasized.