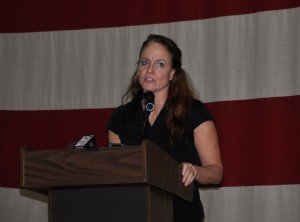 Kavaney, who was representing Gov. Andrew Cuomo, said she’s been deeply moved watching Soldiers and their families deal with pending separation at deployment ceremonies. It’s an emotional event and encapsulates the sacrifices Guard members make on a regular basis.

Major General Patrick Murphy, the Adjutant General, spoke about the meaning of Memorial Day. Thirty-two members of the New York Army National Guard have given their lives in Afghanistan and Iraq and are among the thousands who have made the ultimate sacrifice for the nation, Murphy said.

Murphy also noted that this year marks the 50th anniversary of the United States involvement in Vietnam.

Those Soldiers, like those of today, gave their all and did their duty, he said.

The May 23 ceremony honored all members of the United States Military who have fallen while serving their country and featured the traditional playing of Taps-- the bugle call written to mark the end of the day by New Yorker and Civil War General Daniel Butterfield-- and the seven-member firing party discharging three rounds each, which marks a military funeral.

Memorial Day originated in Waterloo, New York in May 1866 as a way to mark the sacrifice made by local soldiers who died during the Civil War. In 1868 the observance was endorsed by the Grand Army of the Republicrdquo;the main Union veterans organization of the time-- and became a national event.

While Memorial Day has come to mark the beginning of summer, for the 16,000 members of the New York Army and Air National Guard and the civilian employees of the Division of Military and Naval Affairs who support them, Memorial Day is still important as a day to reflect on those who gave their lives in battle.

The first Memorial Day celebrations in New York marked the deaths of 53,837 New Yorkers who died in the Civil War.

Another 52,055 New Yorkers have died in the Spanish-American War, World War I, World War II, Korea, Vietnam and the Persian Gulf War.

Since 2001 there have been 496 military members who called New York their home, or who were stationed in New York, mostly at Fort Drum in Jefferson County, who have fallen in battle in Afghanistan or Iraq. Of those military members, 32 belonged to the New York Army National Guard and one Marine Corps Reservist was also a member of the New York Naval Militia.

Sergeant Heath McMillin of Canandaigua, assigned to the 105th Military Police Company, became the New York National Guard’s first combat loss since the Korean War, July 27, 2003, when he was killed in Iraq by an improvised explosive device.

First Lieutenant Joseph Theinert from Sag Harbor, Long Island-- assigned to the Headquarters 27th Infantry Brigade Combat Team in Syracuse and deployed to Afghanistan with the Army’s 10th Mountain Division--was killed on June 4, 2010, also by an IED and is the most recent National Guard loss.

The Division of Military and Naval Affairs began holding pre-Memorial Day programs at its headquarters in May 2005 to remind the community and National Guard members of the purpose of the Memorial Day holiday.