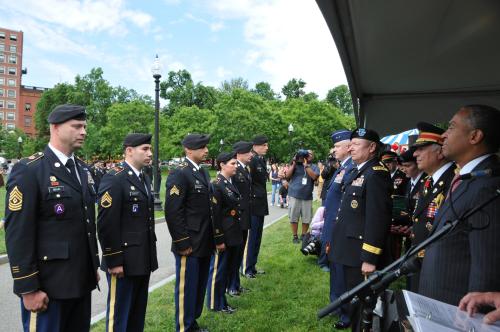 Rodriguez, and the other 13 Soldiers from the Massachusetts Army National Guard, was also presented with a coin to recognize their selfless and quick response to the bombing which occurred during the Boston Marathon on April 15.

Rodriguez was one of five members of the 24th CST who augmenting the Massachusetts National Guard’s security precautions during the marathon.When the bomb went off he responded to the scene. Also on duty that day were: Staff Sgt. Darren Odom, Staff Sgt. James Haynes, Staff Sgt. Omar Rodriguez, and Staff Sgt. Taekwon Kim.

Members of National Guard CSTs are specially trained to identify the presence of chemical, biological, and radiological agents and inform civilian first responders about what they have found. As a precautionary measure CST members are usually present at all major events.

"I am extremely proud of the Soldiers and Airmen who were deployed to Boston, " said Major Jody Lupo, the commander of the 24th CST. "In the face of grave danger they flawlessly executed their tactical mission and placed themselves in harms way to protect others."

"The 24th CST has long standing cooperative partnership with the 1st CST of the Massachusetts National Guard. The value of that relationship was tested and proven under fire in the moments following the horrific events at the Boston Marathon,"Lupo said.

Rodriguez has served in the 24th CST since June 2012. He joined the New York Army National Guard in 2008 and served as an avionics mechanic in Company B 642nd Aviation Support Battalion. In 2011 he became the Chemical, Biological, Radiological and Nuclear (CBRN) Specialist for the company.