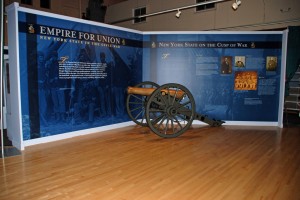 Saratoga Springs-- The new exhibit at the New York State Military Museum and Veterans Research Center tells the story of New York and the Civil War using unique items from the museum’s collection. (Paul Fanning, Friends of the Military Museum)

SARATOGA SPRINGS, NY -- As the nation prepares to mark the 150th anniversary of the Battle of Gettysburg, a new exhibit has opened at the New York State Military Museum in Saratoga Springs which tells the story of New Yorkers in the Civil War. The exhibit chronicles the role that the state’s 413,000 Soldiers, citizens and industry played in the fight to save the Union. It features 100 artifacts, photographs, and pictures from the museum’s extensive collection. The exhibit "New York in the Civil War" will be a permanent part of the museum, but the artifacts being displayed will rotate annually. The museum’s collection dates back to 1863 when state officials began collecting items, pictures, books, flags and newspapers highlighting New York’s involvement in the war, by the Bureau of Military Statistics. Today, 150 years later, the state has the most extensive collection of Civil War battle flags in the country along with other items to include: • A Confederate soldier’s metal body armor salvaged from the battlefield at Gettysburg; • The guidon (small flag) of the 125th New York State Volunteer Infantry carried at the Battle of Gettysburg by Pvt. William Mullin when a Confederate bullet smashed the flag-pole as he held it; • The coat worn by Mechanicville New York native Col. Elmer Ellsworth when he was shot by Confederate sympathizer at the start of the Civil War; • A Scottish regiment full dress uniform, complete with kilt and Glengarry cap of the 79th Regiment, from New York City; • A cloth stained with President Abraham Lincoln’s blood following is assassination at Ford’s Theater; • And the key to Confederate President Jefferson Davis’ liquor cabinet, "liberated" by a New York Soldier from the Confederate White House after Richmond fell in the closing days of the war. The exhibit highlights battles and topics that will display more than 100 artifacts, many never seen before, from the New York State Military Museum collection. The exhibit will focus on six major themes, the run-up to the Civil War and a summary of the major events of each year, 1861 through the war’s end in 1865. New York at Gettysburg: More than 23,000 New York Soldiers fought at the three-day battle of Gettysburg, a quarter of the total strength of the Union Army of the Potomac. These Soldiers served in 68 infantry regiments, one separate infantry battalion, seven cavalry regiments, a cavalry company, 16 artillery batteries and four companies of sharpshooters (what they called snipers in the 19th century.) New Yorkers commanded two of the Army of the Potomac’s seven infantry corps-the major maneuver unit of the war-and played key roles throughout the three days of fighting, and even before. As Confederate General Robert E. Lee sent his Army north to invade Pennsylvania, President Abraham Lincoln’s Secretary of War, Edwin Stanton , asked New York Governor Horatio Seymour for help on June 15. On June 18 Governor Seymour called out the New York National Guard and sent 12,000 New York Citizen Soldiers to Harrisburg, Pennsylvania to defend that city. The first Soldier killed in what historians call the "Gettysburg Campaign"-the movements of the Confederate and Union armies which led to the climactic battle-was a New Yorker. Corporal William Rihl, a member of the 1st New York Cavalry, was killed when his company skirmished with Confederate Cavalrymen near Greencastle Pennsylvania. The first shots fired by Union Soldiers during the battle came from the carbine of Corporal Alphonse Hodges of the 9th New York Cavalry ,who fired at Confederate Soldiers an hour after sunrise on July 1 as they advanced along the Chambersburg Pike towards Gettysburg. And the first Union death at Gettysburg was a New Yorker: Corporal Cyrus W. James, another member of the 9th New York Cavalry was killed when Confederate soldiers returned fire. And on July 2nd Brig. Gen. Gouverneur Warren, from Cold Springs, made one of the most important decisions of the battle. As Confederate troops attacked the left flank of the Union line, Warren realized that the hill known as Little Round Top was undefended and critical. He sent a staff officer to find troops to occupy the hill. They got there in time to prevent the Confederates form outflanking the union line and winning the battle. By the end of the battle 994 New Yorkers were killed, 4069 were wounded, and 1753 were missing or captured, many of whom were among the unknown dead or died later in prison.