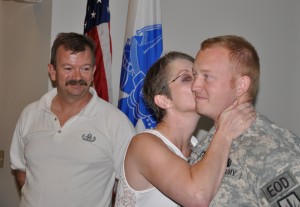 On Friday, July 19, Young’s heroism was recognized with the award of the Bronze Star with V Device, for valor, at the Scotia-Glenville Armed Forces Reserve Center here.

At the time Young was serving with the Army’s 760th Ordnance Battalion, based at Fort Drum, N.Y. He is currently assigned to the New York Army National Guard’s 1018th Ordnance Company (Explosive Ordnance Disposal), which is headquartered at the Reserve Center.

“ It’s weird, I’m not sure what all the hubbub is all about, said Young, referring to the recognition. "It happened a long time ago, and I would do it again. It’d what you do."

"Today we honor an individual who went to extraordinary lengths to protect and save the lives of his fellow Soldiers," Cuomo said. "At great personal risk, Sergeant Young not only carried his badly injured platoon sergeant to safety through enemy gunfire, but he also returned to the battlefield to successfully complete his mission," Cuomo added.

New York Army National Guard Brig. General Michael Swezey, who presented Young with his medal, pointed out that while many Soldiers serve and serve well, Young did something more.

"The military awards very few Bronze Star Medals for Valor, indicating that Josh demonstrated a level of extreme personal courage and selfless service,” Swezey said. "I am struck by the courage he displayed to protect his fellow Soldiers."

On March 16, 2012 Young was attached to Company A, 5th Battalion, 20th Infantry Regiment, nicknamed Attack Company, which was operating in Siah Choy, Afghanistan in the area known to the military as Regional Command South. The unit is known as “Syke’s Regulars”, a historic Army designation.

The company command had decided to blow up a strategic wall in the village of Manezai. The wall bordered a road that was used to resupply and reinforce Combat Outpost Siah Choy, where Young’s company was located.

During the previous three months the company had observed insurgents planting more than 60 improvised explosive devices (IED) along the road, using the wall as cover. With the wall gone, the company would be able to use their reconnaissance capabilities to stop the IED attacks.

The 3rd Platoon of the company was given the mission. Young was accompanying the platoon as the EOD team leader, tasked with placing the explosives and detonating them. Young and his team placed over 1,200 pounds Of C4 explosives at points along the wall as they prepared to execute the mission.

About 15 minutes after the 3rd Platoon moved into place, 50 enemy fighters moved to locations north and east of the American soldiers and began firing AK-47s and mortar rounds at them. One of the mortar rounds detonated 400 pounds of C4 that had been placed along the wall at its northern end. The explosion of the C4 incapacitated the entire squad at that location, including the platoon sergeant.

Young was about 150 feet away from the blast, which picked him up and threw him backwards into a row of grapes, while debris rained down over him.

While the rest of the platoon sought cover to regroup from the shock of the explosion, Young sprinted across the open ground, through dust and settling debris, to assess any casualties.

Young then volunteered to carry the platoon sergeant to the landing zone where the medivac helicopter was heading, despite the sporadic fire the platoon was still taking from the enemy.

After carrying the platoon sergeant to safety, Young returned to the battlefield to complete the wall’s demolition, accomplishing the platoon’s mission.

Now he is studying chemistry at Monroe County Community College in Rochester, serving on the local volunteer fire department in Fairport, N. Y, and moving ahead with his life.

He still keeps in contact with the Soldier he saved, although the sergeant lost both legs. That platoon sergeant is doing pretty well and learning to walk on his artificial legs, Young said.

The five-months of specialized explosive ordnance disposal training he received prior to deploying gave him the skills and the mindset he needed when the time came, Young said.

"It was second nature, it’s what you do as a Soldier," Young said.

But his mother Kim Young, who attended the ceremony with Young’s father Tim, said her son needed to give himself more credit.

"We’re extremely proud of Josh and his accomplishments. He never really told us alot about the incident so we are learning about his actions today,” she said.