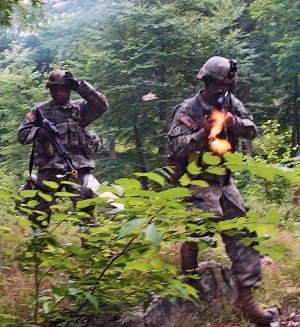 Institute instructors completed their annual Infantryman Transition Course here Aug. 10, graduating 19 Soldiersrdquo;coming from as far away as Guam-- into fully qualified infantryman. The course is open to Soldiers from all Army components, and passing the course enables troops from other Army career backgrounds to complete their transition to infantry units.

To earn the blue infantry cord, the students went through two weeks of rigorous classroom, weapons and field training. The training was capped with a three-day field-training exercise, where students put the mountain of infantry knowledge they’d learned to work in the mountainous terrain of Camp Smith.

Students worked many 12 to 14 hour days learning the way of the infantry, and they worked around the clock during the field-training exercise, Ciccone said.

Being an infantry Soldier is the best job in the Army, said course instructor Staff Sgt. Michael Martin of Cobleskill, N.Y. Infantry Soldiers do more -- and carry more -- through challenging terrain, using their boots as their "main mode of transportation."

"The bar is set high," he said. "It is high for a reason. You rely on the guy next to you. There’s no bus picking you up and bringing you to chow. Chow is in your rucksack. That’s your apartment. Everything you live on is in that bag."

The Army’s Infantry School at Fort Benning, Ga. sets the bar high for the instructors. In addition to being infantry-qualified, institute instructors have to pass several courses and be board-certified by the infantry School, Butcher said.

"Every instructor that comes here has relevant experience, either in Afghanistan or Iraq, and they have squad leader and team leader experience that they can bring to the table and teach people," Butcher said.

Though the program of instruction is set by the Army’s Infantry School at Fort Benning, Ga., New York RTI instructors have added other realistic, challenging things like road marches and air-assault operations in order to produce full-fledged infantrymen, he explained.

One of those air-assault operations kicked off the field training exercise on Aug. 7. Students boarded helicopters which flew them to a landing zone at Camp Smith. After securing the landing zone, students moved tactically up the rocky, tree-covered hills.

The action began immediately inside the tree line as instructors tossed artillery simulators so the students could practice reacting to indirect fire. As the simulators whistled, echoed shouts of "incoming!" as they sought cover.

As the sound of the explosions died away, the students got up and moved out quickly, lugging their weapons, 40-pound packs, ammunition and other equipment up the slanted landscape to areas designated by their student leaders.

From concealed positions among the trees and boulders farther up, mock enemy combatants -- played by other institute instructors -- fired at the approaching students, testing infantry skills such as engaging targets, moving as teams and squads and seizing objectives. The students assaulted three enemy positions the first day.

The instructors didn’t let up either. They gave gentle critiques, shouted corrections and on occasion threatened to make the students repeat missions if they didn’t perform them to standard.

At one point Martin called out a student because he wasn’t lying in the proper prone position.

"It’s called discipline, gentlemen," Martin announced evenly as the student corrected himself. "It’ll keep you alive. It’s doing the right thing when no one’s around."

That wasn’t lost on Goss, who called it all part of the course.

"You know, if you screw up, you get yelled at," he said. "Be a man about it, take it, fix what you did wrong and keep going."

Goss belonged to an active component unit and served as an engineer Soldier in Iraq. The course took him back to another time in his life as a Soldier, he said.

"This makes it feel like you went through basic training, and you’re starting from the beginning," he said of the course.

Turning back the clock -- and resetting it -- is also part of the course. The students come to the course from all kinds of Army-career backgrounds, so instructors try to break them of old habits while honing them into the infantry attitude and character, said senior instructor Sgt. 1st Class Sihoon Chung, of Richfield, N.J.

That requires discipline and hard work on the instructors’ part. They worked from 4 a.m. to 11 p.m. almost every day, preparing course materials, planning training and coordinating logistical requirements, according to Butcher and assistant instructor Staff Sgt. Bryan Hart, of Dolgeville, N.Y.

"Our job isn’t just to train these Soldiers in infantry tactics, it’s to better the New York Army National Guard, and the only way to do that is to find out what the line units are lacking when they’re getting brand new Soldiers coming over," Butcher said.

The weight of information students are expected to learn and retain also makes the course intense, Goss said. While trying to absorb all that knowledge is like "putting 10 gallons of water in a five-gallon bucket," most of it sinks in, said Goss.

"With time, you end up retaining a lot of it, more than you thought you did," he reflected.

That knowledge, discipline, toughness and understanding of sacrifice is part of winning battles and being an infantryman, said student Spc. Michael Aguon, of Aganaguam, Guam, who belongs to the 100th Battalion, 442nd Infantry, United States Army Reserve. It takes a lot of heart and dedication, he stressed.