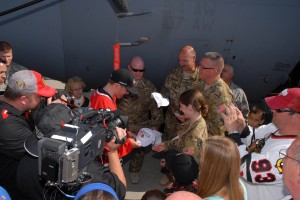 Members of the Niagara Falls Air Reserve Station had the opportunity to meet Kane, as well as have photographs taken with the Stanley Cup and Conn Smythe trophy.

“My son was absolutely thrilled,” said Lt. Col. Douglas C. Eoute, whose son Lucas is a longtime Patrick Kane fan. “He was able to meet Kane and walk with him as he carried the Stanley Cup to the display table, and Kane signed his jersey.”

“I can carry around a Stanley Cup that’s 35 pounds, or an MVP trophy that’s brought along with us here today, but for what you do for our country, you carry our country on your back. It’s purely amazing. I just want to express my gratitude for everything you do for this country,” Kane said.

Kane and the Blackhawks won the Stanley Cup in June when they defeated the Boston Bruins for the National Hockey League championship. Kane earned the Conn Smythe Trophy, which is awarded to the most valuable player of the NHL’s Stanley Cup Playoffs