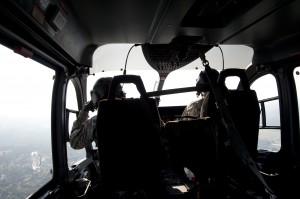 RENSSELAER, N.Y. ŌĆ“ CounterdrugŌĆÖs aviation unit flies the UH-72A Lakota on a search for marijuana plants. On board is also a law enforcement agent with Rensselaer County. If found, the marijuana is either marked for eradication at a later time or ground support is called in to destroy it. (U.S. Air Force photo by Tech. Sgt. Catharine Schmidt

SCOTIA, N.Y. -- Counterdrug Soldiers with Detachment 2, A-Company, 1-224th Aviation Security &Support Battalion based out of Latham are helping New York State fight the ongoing battle with illicit drugs, and with harvest season here, the search for marijuana plants is in full gear.

ŌĆ£The aircraft seats about five people in the back,ŌĆØ said a pilot with the unit. ŌĆ£It also has a great open cockpit and cabin so aerial reconnaissance is very easy in this aircraft because of the good panoramic view that we have.ŌĆØ

The helicopter is also equipped with forward-looking infrared (FLIR) cameras, giving pilots the ability to see clearly in both day and night, as well as a search light capable of lighting up a football field.

ŌĆ£We support local law enforcement, whether it be local county sheriffs, the Drug Enforcement Administration, state police ŌĆ” any type of law enforcement agency that gives a request through the Counterdrug office, we can support for a number of things.ŌĆØ

While the unit has the ability to support local law enforcement agencies with just about any kind of aerial reconnaissance missions, their primary mission during harvest season is eradication.

ŌĆ£This is when you can really start to see the plants,ŌĆØ said the pilot. ŌĆ£WeŌĆÖll pick up a law enforcement agent (LEA) and bring them up in their respective jurisdiction areas. We go around to either points they are familiar with or points they have gotten tips from, and we basically just look on the ground for marijuana.ŌĆØ

With the aircraftŌĆÖs camera capabilities, they can zoom in on a plant to see exactly what it is, and the infrared capability also helps to spot marijuana plants.

ŌĆ£If we see it, we either mark it for eradication at a later time or we talk to (law enforcement agents) on the ground and lead them to where it is. (The LEAs) will then pull it and destroy it.ŌĆØ

While the crews may not find what theyŌĆÖre looking for during some missions, other missions make up for that. One day a mission could produce nothing, and the very next day, the crew will find exactly what theyŌĆÖve been looking for and sometimes more.

ŌĆ£A lot of people are moving their plants inside,ŌĆØ said another pilot. ŌĆ£But when we do find fields of marijuana, just like that, someoneŌĆÖs annual income is gone.ŌĆØ The support the aviation unit has given law enforcement hasnŌĆÖt gone unnoticed.

ŌĆ£They really appreciate us coming out to aid in their role to keep their counties clean,ŌĆØ said the pilot. ŌĆ£WeŌĆÖre helping them keep drugs off the street and out of schools, and they love when we are able to come out. ItŌĆÖs a very good relationship.ŌĆØ

Aviation is just one of CounterdrugŌĆÖs many programs to keep drugs off the street.

As of Aug. 23, New York Counterdrug Task Force as a whole has supported in the seizure of more than 8,300 pounds of drugs over the fiscal year. Drugs seized include cocaine, crack cocaine, heroin, marijuana and methamphetamine. Of that, 3,036 pounds of cultivated marijuana was destroyed with CounterdrugŌĆÖs help, with a street value of more than $12.5 million.