The long road to remember: Soldier’s 9/11 charity walk gives veterans a leg up 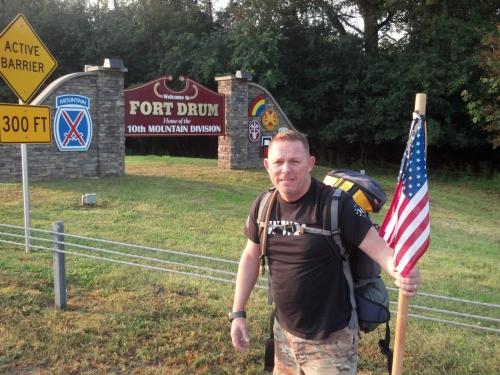 New York Army National Guard Sgt. Glenn Follett pauses for a photo before pushing on to a memorial ceremony at Fort Drum, N.Y., Sept. 11. Follett, 44, of Baldwinsville, N.Y., walked about 85 miles from Syracuse N.Y. to Fort Drum in order to commemorate the 9-11 attacks and raise money for the Wounded Warrior project. (Photo courtesy of Sgt. Glenn Follett )

FORT DRUM, N.Y. - New York Army National Guard Sgt. Glenn Follett has served his country around the world, and now he’s walked the distance to commemorate 9/11 and help his fellow veterans. Follett, 44, of Baldwinsville, N.Y., raised about $1,200 for the Wounded Warrior Project by walking from Hancock Field Air National Guard Base in Syracuse, N.Y. to Fort Drum - roughly 85 miles - from Sept. 7 to Sept. 11. The Wounded Warrior Project helps injured veterans. Follett’s five-day march fulfilled a commitment which began roughly a year before, when he was serving with B Company, 27th Brigade Special Troops Battalion, in Afghanistan. The unit operates Shadow RQ-7 unmanned reconnaissance aircraft, and was deployed to south east Afghanistan from April to December, 2012. A Fredonia, N.Y. native, Follett is also a veteran of the first Gulf War and Somalia, and was a volunteer firefighter for the Moyers Corners, N.Y., Fire Department. These things make him feel especially connected to the losses of 9/11, he said. He usually spent 9/11 attending a memorial ceremony, and in recent years he found himself reminding young people about the significance of that day, Follett said. Those encounters made him emotional, he added. "That would break my heart, if we ever forgot that day," he said. In Afghanistan, he and his fellow unit members chalked that date, and other 9/11 mottos like "FDNY," "let’s roll" and "never forget," on the unit’s Shadow RQ-7s. The tour went well, which is a testament to the unit members, Follett said. "We have a good group of trainers and operators," he said. But Sept. 11, 2012 found Follett out on the flight line at dawn, launching a Shadow, as usual. As the sun rose over the mountains and the Shadow took flight, Follett reflected on the date, and the fact that he was finally in Afghanistan, doing his part to fight terrorism. Though it was the culmination of substantial training and effort, Follett felt oddly unfulfilled. "I thought, ’OK, this is cool, but what the heck am I going to do next year?’" he recalled. The thought nagged at him during the rest of the deployment and beyond, he said. Then one day he read about Adam Shatarsky and Chris Senopole, former U.S. Marines who are walking across America to pay homage to the country’s service members and raise money for the Wounded Warrior Project.

Inspired, Follett decided to do his own walk. He established Facebook and donation pages on the internet, selected a route then scouted it by driving the entire way.

He compiled a risk assessment and reviewed the course with his commander, who approved it, Follett said. His goal was to arrive in time for a ceremony being held at the 9-11 memorial near Fort Drum’s Clark Hall around 8 a.m., Sept. 11, he explained. On Sept. 7, Follett picked up an American flag, shouldered his backpack, set out and, according to plan, reached Central Square, N.Y. that day. He surpassed his second-day goal and walked as far as Henderson, N.Y., the next day and reached Watertown, N.Y., the day after that, he said. Drivers honked and cheered for him as he walked the course, Follett said. He spent the fourth day with a friend in Watertown, recovering for the final 10-mile leg to Fort Drum on Sept. 11, he said. The next day he started out at about 3:40 a.m., and a Black River police officer he knew escorted him to the Fort Drum gate. With the police car’s lights flashing behind him, Follett jogged toward the gate - much to the surprise of the military police soldiers guarding it. Not wanting to lose momentum and suffer muscle pain, he slowed to a fast walk and flashed his identification card, he recalled. The soldiers realized who he was and let him through without stopping, he said. "After that, they were cheering and yelling, ’hooh-rah!’" Follett said. More drivers honked and cheered him as he closed in on this goal, he said. "That helped because my feet were pretty blistered up at that point," Follett said. Soldiers and others at the memorial clapped him on the back and shook his hand, he recalled. "It was kind of overwhelming," Follett said. "I got kind of choked up." Though he was still hurting days later, Follett was already trying to come with an idea for next year. "I think just serving isn’t enough," he reflected. "Sometimes you’ve got to do a bit more. We’re not only serving as soldiers. We’re serving as community members."