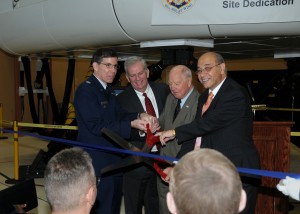 “There are only 12 installations in the US Air Force that have one of these devices here,” said Mr. Dan Kelly, Vice President L-3 Link Simulation and Training. “For it to come to this community says a lot about the individual pull in the guard, and in the community, and the representative. You should be very proud for what was done to get this device here.”

“I just think that it’s wonderful that the Air Force made a sound decision to do this at Stewart”, said State Senator William J. Larkin Jr.,. “The coordination between the air force and the Link operations clearly indicates that we have a team here that is number one in our nation.”

The 105th Airlift Wing operates C-17 Globemaster III aircraft in support of missions around the world from Stewart Air National Guard Base. Until 2011 the unit flew the C-5A Galaxy cargo aircraft. The installation of the C-17 simulator system is part of that transition from one aircraft to another.

The C-17 Training Simulator Training Facility is a state-of-the��“art simulator that that creates a realistic environment that immerses pilots in dynamic, high-definition training scenarios. The L-3 Link company also provides training courses as well. Each year the C-17 facility at Stewart ANGB will support over 360 courses.

“Each crew member, pilot, load master, flight engineer), military or civilian, can tell you horror stories about simulator scenarios that they’ve been through”, said Colonel Matthew Godfrey, Vice Commander of the 105th Airlift Wing. “It’s a common phrase to hear prior to getting in the simulator for the instructor to say that the simulator will be ready once we’re done washing the blood off the walls from the previous crew. “

“ Because of events like this though the same air crew, for the most part, can’t tell you similar stories about things that happened to them in the airplane. And that is because of the training they receive in devices like this that they’re prepared for whatever events may come up,” he said