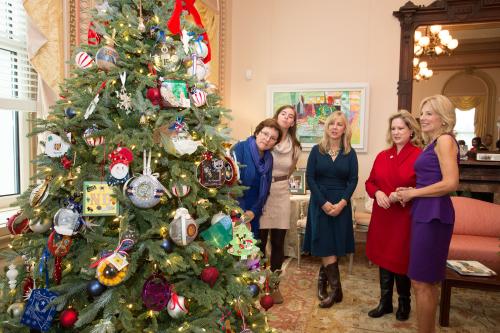 There’s a little bit of New York hanging on the Christmas Tree in the Washington D.C. office belonging to Dr. Jill Biden, the wife of Vice President Joseph Biden this Christmas season.

Biden, the mother of a Delaware Army National Guard Officer, as well as being the Second Lady of the United States, asked the National Guard Family Programs office to create a National Guard Christmas Tree for her office in the Eisenhower Executive Office Building .

The tree is part of the Joining Forces campaign through which Biden and First Lady Michelle Obama are encouraging Americans to support military families.

“We had to think about it,” she said. “We had many ideas floating in the office down to an apple that was carved into a swan, because one of the guys in the office could do that.”

They really liked the idea of incorporating an apple into the design, to represent both the Big Apple of New York City and the “apple knockers” upstate, O’Neil laughed. But they decided it wasn’t practical.

“Sending a rotting apple through the mail wasn’t going to work,” she said.

The requirements for the ornament were that it represent the state, the Army and Air National Guard in the state and the Family Programs office.

“It says New York National Guard Family Programs, it has a family on it, and it is purple, which represents both the Army and Air Guard, and it has yellow on it to represent the Yellow Ribbon Program,” O’Neil explained.

It also says state, nation and community on the back, along with the Army and Air Guard logos and says “Mission First. Family Always”, O’Neil said. That is what Family Programs is all about, allowing the Soldiers and Airmen to conduct their missions while taking care of their families.

The next step was to make a pretty ornament out of the coin. The design team took a coin and drilled a small hole in it. They bought a snow globe from a craft store and hung the coin in the snow globe with fine wire. They filled the globe with water and filled it with glitter for “that Christmassy touch”, O’Neil said.

The final step was to put the famous “I Love NY” logo, in which a heart replaces the word love, on the base of the globe and hang it from a pretty ribbon.

“It’s such an iconic symbol that we knew it would grab everybody’s attention,” O’Neil explained.

“It is a true testament to their support of not only the National Guard but to the value of Families and the part they play in our Soldiers lives and in the defense of our country,” he said.