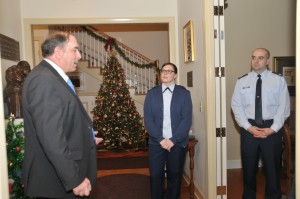 ALBANY, N.Y. ldquo; The New York Air National Guard’s 109th Airlift Wing Company Grade Officer’s Council presented a check of $2,250 to the Fisher House at the Albany Stratton Department of Veterans Affairs Medical Center on Dec. 17, 2013, from money the council raised during a golf tournament, with help from local businesses.

More than 65 golfers from the 109th Airlift Wing and the surrounding community participated in the golf outing, hosted by the CGO Council, at Airway Meadows in Saratoga on Sept. 20, 2013, with the intent of raising money for a local charity.

"We wanted to donate to a local charity, and the Fisher House seemed like the perfect fit," said Capt. Jim Roth, CGO Council president. "They are a unique organization that a lot of people don’t hear about, but they really deserve the recognition. Their program allows families to be close to their loved ones during (hospitalization). I wish we could give more.

"The CGO has done a great job of getting a core group of people working together," Roth said. "We received this opportunity for a golf tournament and really tried to make it a worthwhile event. It was the first time we’ve done something like this, but it won’t be the last."

The 109th AW CGO came to life about three years ago, and comprises second lieutenants (O-1s) through captains (O-3) from throughout the base. Roth said the council currently has about 10 active members.

According to their mission statement, “The 109th Airlift Wing Company Grade Officers’ Council is a dedicated alliance of junior officers. We are committed to the development and maintenance of an informational network to enhance professional development, community service, and camaraderie within our unit and local community. This is accomplished through our dedication to mentorship and leadership as Company Grade Officers.”

The Fisher House at Stratton VA Medical Center in Albany is currently the only one in the state,