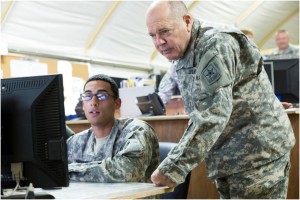 The 42nd CAB deployed to Kuwait in December, and is conducting several joint exercises with nations in the region while maintaining an American presence there.

Ingram and Conley visited various training sites on Buehring on Dec. 16, 2013 where the 42nd CAB demonstrated the capabilities of AH-64D and UH-60s, to increase their familiarity of the operations and regional partnership exercises the 42nd CAB will conduct.

During the visit Ingram and Conley met with soldiers from the 642nd Aviation Support Brigade, 1-189th General Support Aviation Brigade, and the 4-227th Attack Reconnaissance Battalion.

“I encourage all of you soldiers to train and work on your education, spend your time wisely,” said Conley. “The committed, dedicated, and patriotic have come into the National Guard.”

Several soldiers from the brigade had the opportunity to sit down for lunch with Ingram and Conley where they spoke and listened to each of the junior enlisted soldiers.

“Continue your career and what you do every day as a soldier,” said Ingram. “Our Army has become the strongest in the world because of each and every one of you. I am proud to represent each of you at the national level.” While the 42nd CAB is deployed to Kuwait the Brigade will conduct military partnership operations to support ARCENT and improve multi-national interoperability, leading to greater stability and stronger partnerships in the region.