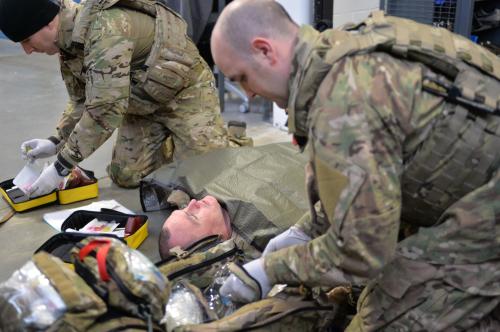 FS GABRESKI AIR NATIONAL GUARD BASE, Westhampton Beach, NY--- New York Air National Guard pararescuemen and Combat Rescue Officers of the 106th Rescue Wing’s 103rd Rescue Squadron tested their emergency medical skills with real-world scenarios that modeled what they would see on the battlefield or in a crash.

The Feb. 27 training sent the pararescuemen, known as PJs, and the Combat Rescue Officers, dubbed CROS for short, rotating through various trauma and medical scenarios, replicating the types of injuries and illnesses often seen on the battlefield, or in rescue settings.

“The courses offered here are a requirement for paramedic and Pararescue recertification,” Major Glyn Weir, a Combat Rescue Officer said. “It’s being put together by Lt Col. Stephen Rush, a doctor who has been appointed the Air Force Pararescue Medical Director. “

PJs and CROs moved from one scenario to another, treating patients with simulated combat wounds and complex injuries.

“We’re slowing things down a bit,” Weir explained. “We’re training for perfection through repetition. No matter how stressful the situation may be when we are on the battlefield, treatment and diagnosis become automatic when it is ingrained. We are repeating it and reinforcing it so that it becomes muscle memory,” he said.

“The thing about this training as opposed to what we do in a civilian paramedic course, is that it’s operationally focused, but still meets the requirements of the National Registry for these men to have their full Paramedic Certification, “ Rush explained.

Instead of using pure civilian motor vehicle accident protocols, the training concentrates on problems like blast trauma and gunshot wounds.

By accomplishing this training “in house,” the 103rd was able to save a significant amount of money that can later be applied to other types of training that complement the course.

Keeping it local also allows the 103rd to take advantage of local facilities like North Shore LIJ, which has offered use of their Patient Safety Institute.

“North Shore LIJ has hundreds of thousands of dollars in equipment that we’ve been able to use,” Doctor Rush said

“We’ve had access to simulation rooms with the most sophisticated mannequins and two way mirrors and microphones, as well as the cadaver lab, which is a surgical skills laboratory. PJs can learn invasive battlefield procedures on human anatomy,” he said.

“We also benefit from their professional faculty interacting with and teaching the men. For example, that we have a real-world heart and thoracic surgeon actually showing the techniques to them, and watching the PJs to make sure they’re doing it right.”

“The things that we do when we practice are the actual procedures and protocols that the PJs execute in theater. Most important, the first time they are doing these procedures is in a controlled environment with direct medical supervision, not on the battlefield with a young man or woman where he have [only] one opportunity to get it exactly right. So we know we’re sending them into the worst circumstances to do the best job they can to save our soldiers, sailors, airmen and Marines,” Rush said.

In addition to the 103rd Rescue Squadron’s participation, Pararescuemen from the Field Training Unit in Arizona and a Flight Surgeon from the 38th Rescue Squadron at Moody Air Force Base took part.

The PJs from 38th Rescue Squadron and Field Training Unit will be bringing the training they receive here back to their units, Weir said.

“They’re getting a lot of hands on training from Doc Rush, who is really pushing to streamline the process and standardize medical care throughout the pararescue community,” he said.