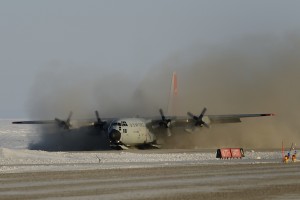 STRATTON AIR NATIONAL GUARD BASE, SCOTIA -- Nearly 40 Airmen and two LC-130 ski-equipped aircraft from the 109th Airlift Wing will be demonstrating their vast capabilities on the Arctic ice as they join the Canadian Forces on Friday, April 11 to participate in Canada’s annual Operation Nunalivut Exercise.

Canada’s Joint Task Force-North has been conducting this exercise in and around the area of Resolute Bay, Nunavut, Canada, since 2007. This will be the first year the 109th will participate.

"We see on the horizon the need for aircraft capabilities to meet Arctic taskings," said Lt. Col. Clifford Souza, 109th Operations Group who will be the lead 109th officer on the exercise.

"We’re trying to get out ahead of it and demonstrate LC-130 capabilities. So we’re taking advantage of this exercise ldquo; we want to develop joint capabilities and interoperability with the Canadian Arctic Forces because they have a need to maintain an airlift reach throughout the high arctic," he explained.

The Canadians have ski-equipped CC-138 Twin-Otter aircraft which don’t have the lift capacity or range the 109th LC-130s have. The 109th will help bring fuel and supplies to the forward-deployed locations during the exercise. Normally Canadian aircraft would do this, but the LC-130 is able to do in one trip what they would need to do in 10, Souza said.

"That shows interoperability and integration between the U.S. and Canada to jointly develop capabilities for the future to operate in the Arctic," Souza said.

"The Canadians are very interested in what we can provide," he said. "We’re also taking advantage of the opportunity to demonstrate those capabilities to set up an expeditionary skiway on the sea-ice. That has significance for search and rescue, because now we have the ability to go somewhere where there’s no runway, set up a ski landing site on sea ice which can provide a forward staging area for personnel, supplies and fuel to increase the operating radius of other aircraft."

While the 109th AW’s primary mission is to support the National Science Foundation in Antarctica and Greenland, in the past "the unit existed to support military customers from the high arctic," Souza said. This is the opportunity for the 109th AW to show that they can still support those missions if needed.

In 1975, the 109th received their first ski-equipped LC-130s and assumed the responsibility of resupply missions for the Greenland ice cap’s radar stations.

Since then, the 109th Airlift Wing has provided the U.S. military’s only ski-equipped aircraft, which has been supporting polar research in the Arctic and Antarctic since 1988. Since 1999, the unit has been the sole provider of this type of airlift to the National Science Foundation and U.S. Antarctic research efforts.