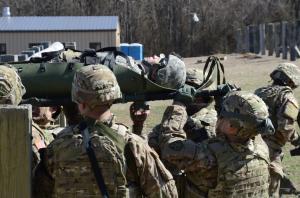 Soldiers with the 4th Finance Detachment from the New York National Guard Navigate a simulated casualty over a six-foot wall as part of a practical evaluation for a Combat Lifesaver course conducted on Joint Base McGuire-Dix-Lakehurst, N.J. on April 1, 2014. The Soldiers completed CLS as part of their pre-deployment training for Afghanistan.(National Guard photo by Staff Sgt. John Etheridge) Not Released

JOINT BASE MCGUIRE-DIX-LAKEHURST, N.J. --s part of their pre-deployment training, 16 Army reservists and National Guardsmen from various units throughout the Northeast put their Army first-aid skills to the test during a practical exercise at a local combat obstacle course that culminated a four day Combat Lifesaver Course April 1. The exercise tested the Soldiers’ ability to render Tactical Combat Casualty Care to a wounded Soldier and then evacuate the victim from the area. The Soldiers had to navigate their casualty through several obstacles including over a six-foot wall and under and through barbed wire barriers while being assaulted by simulated automatic weapon gunfire.

“This is to let them see what it’s like to do treatment in the field…care under fire…tactical field care, and how it’s done during the evacuation phase,” said Jesse Lucarano, a civilian contractor who works as a CLS instructor at Joint Base McGuire-Dix-Lakehurst, N.J. “It’s not set up to pass or fail, but to see how they do under a little pressure.” The Soldiers moved through the course in two groups, one after the other. The first group was comprised of eight chemical, biological, radiological, and nuclear specialists who were all from different units and had never worked together before. “It was the first time we worked together and a lot of us have never done this kind of task before. We had a matter of hours to put it together so there’s no time for a major rehearsal,” said Sergeant 1st Class Rayon Everett, a CBRN specialist for the 401st Chemical Company from Boston, Mass. “We received small arms and an improvised explosive attack, so a complex attack. We encountered casualties and we had to treat them and get them into a safe location, and also call in for medevac. But I think we were able to overcome those challenges and make it through.” The CLS obstacle course also gave some junior Soldiers the rare opportunity to lead a team and build their leadership skills. “Fortunately I was able to be the leader of this group and get some of my leadership skills up and learn a little bit more,” said Spc. Philip Alleyne, a CBRN specialist with the 479th Chemical Battalion from Camp Totten, N.Y. “Being in charge of every aspect of this training was enlightening and definitely a learning experience. I learned it’s not so easy, but its something I do look forward to in the future.” The second group, comprised of eight finance Soldiers from the New York Army National Guard, also gave a junior enlisted Soldier the opportunity to lead their team. “This is pretty much my first time in a squad leader position,” said Pfc. Oscar Chicaiza, a finance specialist with the 4th Finance Detachment. “I think I did fairly well. There were a couple of hiccups here and there from miscommunication but we overcame it. There was a lot of teamwork going on. Towards the end of the exercise we had a flow going and our mission was accomplished.” Pfc. Catherine Medina, also with the 4th Finance Detachment summed up the training and the importance of the CLS course. “It’s repetitive and we do the trainings over and over and I think it’s really going to prepare me for Afghanistan,” she said. “It’s important for all Soldiers. You never know when you are going to need your skills; everybody should know how to save your battle buddy out in the field