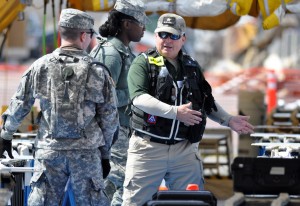 ORISKANY, N.Y.-- A member of the team from Joint Interagency Training and Education Center, of JITEC (in black vest) works with New York Army National Guard Soldiers to get things set up for a weeklong Homeland Response Force Exercise at the New York State Preparedness Training Center here on Monday, April 28.

These expert troops are from the Joint Interagency Training and Education Center (JITEC), and they’re helping nearly 600 Soldiers and Airmen of the Region 2 Homeland Response Force (HRF) pass an evaluation exercise here from April 28 to May 2.

The Region 2 HRF is composed of Army and Air National Guard troops from New York, New Jersey and Puerto Rico, and its command and control element is from the New York Army National Guard’s 27th Infantry Brigade Combat Team (IBCT), based in Syracuse, N.Y.

If the Region 2 HRF passes the evaluation, the 27th IBCT will take over the mission from the New York Army National Guard’s 42nd Infantry Division.

Throughout the week, the subject-matter experts from JITEC have been preparing, training, and evaluating the Region 2 HRF based on three different emergency scenarios.

JITEC employees are hired from all over the United States in order to assist with training and evaluating teams like the HRF who respond to chemical, biological, radioactive and nuclear disasters.

“Our job is to do the external evaluation,” said Lt. Col. Scott Fuller, an officer with JITEC. “We go all over the country to do this for each of the HRF teams.”

Evaluators are selected based on the experiences and skill sets that they’ve obtained through either military or civilian backgrounds.

“It’s one of the benefits of the National Guard,” Fuller said. “A soldier will have a full-time job as a first responder, but on the weekend for the military, they can do other things because of the skill-sets that they have there.”

“These individuals will go to training held by Resource International Group to learn basic search and extraction skills,” said Fleaming. He added that they go to various other courses after that, depending on their skill sets and what they were hired to teach.

However, there are some jobs JITEC members can’t cross-train people for, Fleaming said.

“For instance, we can’t train somebody on how to do the medical portion because that is very specific," he explained. "I know the basics of what they have to do, but I can’t do that job.”