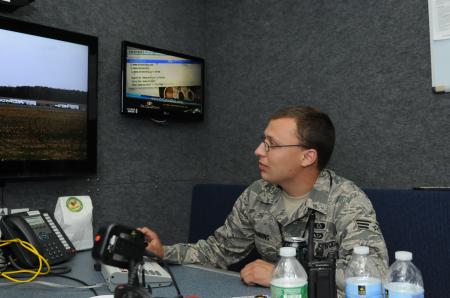 ORISKANY, N.Y. -- The interior comes equipped with two flat-screen televisions, six computer monitors and a teleconference camera. The exterior has a 360-degree rotating camera and a weather monitor. It can be deployed in less than a half hour, and it links first responders during a disaster.

About 600 National Guard troops from New York, New Jersey and Puerto Rico are taking part in the exercise. Most of the troops belong to the Region 2 HRF, and the exercise is designed to test their ability to respond to disasters. Airmen from the New York Air National Guard’s 174th Attack Wing operate the MEOC. During an actual disaster, the MEOC acts as a mobil communications hub for the HRF and civilian first responders. If a disaster disables the communications infrastructure, the MEOC allows the HRF and other emergency responders to communicate with each other via radio, phone and email. “It’s a command and control element for major responses,” said Tech. Sgt. Joe Hernon, of the 174th Attack Wing Emergency Management Flight. “Whether it be an emergency response or a pre-existing scenario." The MEOC resembles a trailer and it’s very user-friendly when it comes to setting it up on a site.

During normal operations, the MEOC operates with two emergency managers, one radio technician and one communication technician. Depending on the activity or response scenario, the crew size and personnel may change.

The MEOC has enough technology and fuel to be run for a number of days.

“Ideally we like to be self-sufficient for up to seven days,” said Hernon.

Hernon said the experience is the most important and enjoyable thing about operating the MEOC.

“I enjoy working with new people, being able to share different experiences, knowledge and being able to collaborate,” said Hernon. “Collaboration makes everyone involved better."

He enjoys the challenges that come with each exercise, said Senior Airman Daniel Manning, of the 174th Attack Wing Emergency Management Flight.

“Each exercise gives us more experience and makes us better at our job," he said.