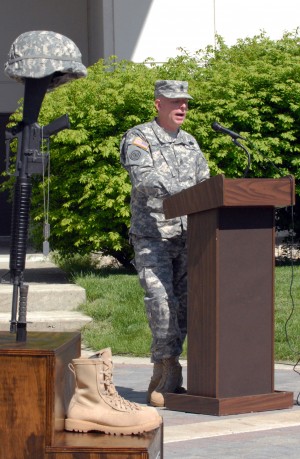 LATHAM, N.Y. - New York State leaders took time out to recall both their distant and recent losses in a Memorial Day ceremony here May 20.

"While I wish I could mention every member of the New York Army Guard we have lost, I cannot," Wicks said. "I would however like to speak briefly about three individuals, three members of our New York National Guard, three losses that have had an impact on me." Wicks went on to speak about Williams, Brown and Labraico, calling them "fallen heroes who left his world too early, to help secure our freedom."

Over 200 New York National Guard Soldiers, Airmen and civilian employees attended the ceremony near at the New York State Division of Military and Naval Affairs (DMNA) here. The ceremony was held outside near the facility’s flagpole, where American and New York State flags often at half-mast to honor those recently killed in action.

One of wall of the DMNA lobby is adorned with pictures of the 33 New York National guard members who’ve been killed in action in the war on terror. The memorial is called the "Faces of the Fallen."

The Memorial Day ceremony included a bugler playing taps and a detail of Soldiers who fired volleys to salute those who sacrificed their lives for America. That same day, Wicks and Maj. Gen. Patrick Murphy, the New York State adjutant general, and 30 other Soldiers and Airmen attended the funeral of New York Air National Guard Maj. Gen. Robert Knauff, retired, in Saratoga, N.Y.

Wicks spoke after speeches by Murphy and Thomas Abt, the state Deputy Secretary for Public Safety.

While still a senior at Averill Park High School, Williams joined the in 105th Infantry, 27th Division in 1939, Wicks said. He graduated, was mobilized in 1940, commissioned and sent on to the 128th Infantry, 32nd Division. In 1944, Williams was killed in action in New Guinea and awarded the Silver Star posthumously. He was 23 years old.

A Glens Falls, N.Y., native, Brown joined the New York Army National Guard in 2002. He served with the 2nd Battalion, 108th Infantry in Iraq and was killed in action in Samarra on Easter Sunday, 2004, Wicks said. Brown was 21 years old.

Following in parents’ footsteps, Labraico joined the New York Air National Guard after graduating from high school in 2008. He served in Iraq in 2011 and in Afghanistan in 2013, where he was killed in action outside of Bagram Air Base, Sept. 5. Labraico was 22 years old, Wicks reflected.

Wicks asked those gathered at the ceremony to a service member, or all service members who "gave their lives so we can stand here today."

"I shared with you the stories of three of the thousands of our fallen heroes," Wicks concluded. "Feel free to honor one of them if you choose. Or walk to the [DMNA] lobby and look at the photos of the 33 Service members we have lost since 911. Or just stop at your local cemetery where you will find a flag on a hero’s grave. Thank you."