August 10, 2020 | 4:17 pm Information on Novel Coronavirus
Coronavirus is still active in New York. We have to be smart. Wear a mask and maintain 6 feet distance in public.
Get the Facts 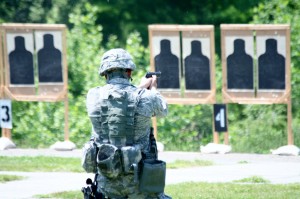 Members of the New York National Guard compete in the individual pistol marskmanship range during the TAG match at Camp Smith in 2013.

But the match is about much more than winning, according to Senior Master Sgt. Edward Stefik, of the New York Air National Guard’s 107th Airlift Wing (ARW). Though the team from the 107th ARW has won four years in a row, Stefik stressed that the match is mostly about training -- and winning in combat.

"We’re in a real-world situation, we’ve been at war for over 10 years," said Stefik, of Lewiston, N.Y. "This isn’t just a competition, it’s a training experience,"

Stefik is among about 125 New York National Guard Soldiers and Airmen who will be taking part in the match and testing their marksmanship skills with the M-16 rifle, M-9 pistol and M-249 light machine gun.

Marksmanship training and competition has long been a key component of National Guard training. During the 1800s, Annual New York National Guard shooting competitions in New York City and at Camp Smith, then known as Peekskill Camp, were reported by the New York Times and other newspapers.

The modern Adjutant General’s Match requires participants to employ the weapons used on the battlefields of Iraq and Afghanistan. The match consists of eight timed events that include the use of those weapons during close-quarters combat, casualty, and nuclear biological chemical (NBC) drills.

Along with giving the troops more experience with their weapons, the match builds camaraderie, teamwork, mentorship and leadership, Stefik said. Preparing for the match is like a mission, since it involves training, logistics and physical fitness, he added.

"It’s not just standing on a line and firing," Stefik said.

The troops also learn more about the capabilities of their weapons at various distances, he explained. This type of knowledge can be applied in combat, he stressed.

"That’s the reality of what you take away from this competition, is what you can apply on the battlefield."

The various events begin on Saturday, May 31.