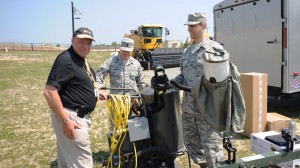 WESTHAMPTON BEACH, New York- What happens in Suffolk County. New York if there is a radiological emergency?

The Suffolk County Office of Emergency Preparedness jumps into action and, with an okay from the New York State Division of Homeland Security and Emergency Services the 106th Rescue Wings’s 106th Medical Group Patient Decontamination Team will do the same.

Suffolk County OEM coordinates the county’s response to natural and man-made disasters. OEM personnel are responsible for working with local, state, and federal officials in all aspects of shelter management, planning, resource management, and emergency response and recovery activities.

Because of the 106th Medical Group’s highly responsive Patient Decontamination (Decon) Team, the 106th Rescue Wing will now be incorporated as one of the county’s options within the OEM’s Radiological Emergency Plan.

On May 3rd, the Suffolk County Public health Emergency Preparedness Representative found out how useful the 106th MDG Patient Decon Team really was.

“Today we found out what assets the Air National Guard, specifically the 106th Rescue Wing, could offer us in the event of a Radiological event. We got to see a demonstration video and actually got to see the assets, which were quite impressive.” Dr. Salvatore Scarpitta said.

Scarpitta is a Forensic Scientist who is also a Suffolk County’s Emergency Preparedness representative.

“The assets which I have seen today which were the tents that come up, the showers and the decontamination capabilities with tempered water and the 24 trained personal who will show up in two shifts of 12 will be a be a huge asset to have in the field within six to eight hours or less.”Scarpitta added.

“I got more information than I anticipated today. We had difficulty getting a building to do decon showering and this is ideal and could be done out in the field anywhere,” he said. The 106th Medical Group is more than willing to help out with Suffolk County’s Radiological Emergency Preparedness endeavors, said Lt. Col. Gilbert Harvey, the 106th Medical Group administrator.

Communication and education will be important for both entities while working together during training and during an incident, Harvey explained.

“I think this is a great opportunity to let our civilian operations know what assets the Air National Guard has to offer for a domestic incident. We can also help them with the education piece concerning our processes as well as they can educate us on how their process works; so that when we exercise an incident together we will already know how we are going to integrate with each other” Harvey said.

106th Rescue Wing’s relationship the Suffolk County’s OEM will turn out to be a longstanding partnership between the Air National Guard and the community, Harvey added.

“This patient decon package was made for domestic operations. It was made to be available for a wing commander to use at a moment’s notice when something in their community was affected.” Harvey explained

“That is why it is being staffed by full timers at the Air National Guard Bases, so it could be used any day of the week. So, yes I think that this will be a positive ongoing training event and an option for a real world event,” Harvey added.