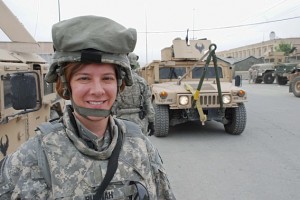 Warrant Officer Patricia Burnham started out as an personnel NCO before becoming a warrant officer.

LATHAM -- The New York Army National Guard needs quality warrant officers, so Chief Warrant Officer 5 Robert Wold, New York’s Command Chief Warrant Officer, is looking for good NCOs to fill those slots. The need is especially critical in the intelligence, field artillery, and signal fields, Wold said. Only twenty percent of our Field Artillery warrant officer slotsrdquo;many involving critical targeting skills-- are filled, while vacancy rates for Intelligence and Signal Corps warrant officers stand at around 60 percent. Across the New York Army National Guard there are about 90 positions out of 285 authorized which need to be filled, he said. The bulk of these vacancies are in positions filled by traditional “M-Day” Soldiers, Wold said. The full-time Active Guard and Reserve and military technicians who work in human resources, , ground maintenance, and aviation fields form a natural feeder for warrant officers in those fields, Wold explained. Finding good men and women to fill the other warrant vacancies has proven a bit tougher, he admitted. While a full-time Soldier or technician can justify taking up to six months to attend a Warrant Officer Basic Course as a natural part of their full-time job, it can be much harder for a traditional Guard Soldier to justify that commitment, Wold said. “That squared away Soldier in the unit is also the consummate professional in their civilian job,” Wold said. “Everybody is busy these days and something has to give and when they work it out with their family or employer, the priority may not be the Guard.” Candidates making the transition from the NCO Corps to serving as a Warrant Officer are normally a sergeant with at least 48 months experience in their military occupational specialty and at least three good evaluation reports in that specialty, Wold said. The warrant officer corps also demands good leaders, he emphasized. “The perfect candidate is an E-6 or E-7 that has got 8 to 12 years in,” Wold explained. “They have that solid leadership experience. They have carried the green book, monitoring, and developing their Soldiers. Then, they add in their MOS skills and it is just a natural progression.” Why should an NCO go the warrant officer route instead of moving up the ranks into a master sergeant or first sergeant job? There are a couple of reasons why becoming a warrant officer is the right move for some NCOs, Wold said. Moving up in the NCO Corps can mean becoming a generalist, working in administrative and leadership roles. Many NCOs miss the rewards of working in a specific military specialty, Wold said. Warrant officers stay in their field throughout their career. Warrant Officers today-- particularly in the targeting, intelligence, and signal fields ldquo;also play critical roles in providing commanders the information they need to fight and win on the high-tech battlefield. “The command is going to come to you and look for that guidance, “ Wold said. There’s also a financial incentive for new warrant officers, Wold said. There’s a $10,000 bonus for filling needed warrant officer positions, and more importantly, becoming a warrant officer means a heftier retirement at the end of a military career. A good NCO moving into a warrant officer position is very likely to make Chief Warrant Officer 4 before they retire, Wold said. His goal, Wold said, is to make sure Soldiers and leaders realize what options for advancement are available. Soldiers interested in becoming a warrant officer should start planning for it and leaders should be identifying Soldiers with the needed skills, he said. Commanders and senior NCOs can help identify and mentor Soldiers they consider to be good candidates for a career as a warrant officer, just as they mentor for future NCO leaders. “We are trying to build a bench,” Wold added. While filling any slot is important in ensuring unit readiness, he’s particularly concerned about the warrant officer vacancies in the headquarters of the 42nd Infantry Division and the 27th Infantry Brigade Combat Team, Wold said. “There are significant numbers of vacancies and someone has to make up for that workload,” he explained. “When you are missing that many officers, that many planners; someonerdquo;whether it is a senior NCO or a junior, midlevel officerrdquo;someone is taking up the slack there.” “Without the warrant officers, the NCOs and officers are not allowed to focus totally on their jobs. Those same leaders do not receive the level of training a warrant officer would get, so that is another challenge,” he said. More Information: The New York Army National Guard’s recruiting and Retention Command has three warrant officer recruiters. • Chief Warrant Officer 2 Christopher Seeger in Syracuse, Rochester and Buffalo at 585-259-5147 • Chief Warrant Officer 2 Brian Sherman in Westchester, New York City and Long Island at 518-491-3448 • Chief Warrant Officer 3 Harry McDonough for the Hudson Valley, Capital Region and north at 518-272-6353 Or go to the warrant officer recruiting page on the Division of Military and Naval Affairs website at http://dmna.ny.gov/arng/ocs/?id=warrant