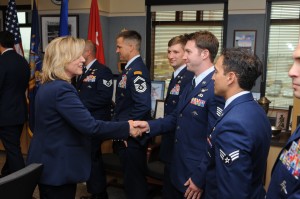 WESTHAMPTON BEACH, NEW YORK- Secretary of the Air Force Deborah Lee James visited the 106th Rescue Wing on Aug. 13 to get a first-hand look at the mission. “My initial reaction to you is one word -- ‘Wow!’” said James. “You all and everything that you are doing is so impressive.” James’s trip from New York City to Westhampton Beach New York was no ordinary ride. On her way to the 106th RQW, James witnessed a Combat Search and Rescue exercise featuring the HC-130 and Pararescue Jumpers while flying on a HH-60 Pave Hawk helicopter. After James touched down at F.S. Gabreski Air National Guard Base she discussed the needs of the New York National Guard with Major General Patrick Murphy, the Adjutant General of New York, and met with six Bronze star recipients from the 106th: Capt Ronnie Maloney, Senior Master Sgt Erik Blom, Master Sgt Anthony Yusup, Staff Sgt Matthew Zimmer, Staff Sgt James Dougherty, and Senior Airman Christopher Petersen.

During the 106th town hall meeting, James spoke very highly of the Bronze star recipients. “These six are a testimony to the tremendous work that you do,” James said.

“Great people fuel all great organizations,” James said. “It always comes down to people and that is why I wanted to put people first,” she said referring to her top priority. The Air Force of the future will be smaller, James said, but the downsizing will be more on the Active duty side compared to the Guard and Reserve side.

“Over time we are going to see more missions shift toward the Guard and Reserve, which I think is a good thing for the tax payers.”

James also said there will be less of a divide between the Active Duty, Guard and Reserve forces administratively in the future.

“We are working on how to make it more seamless in the back office so people can flow more easily from active, guard and reserve,” she explained, saying the Air Force is working on reducing paperwork by integrating personnel systems across the components.

James also talked about readiness now and the future of readiness.

“We have to make sure that we return to a higher level of readiness and that is precisely why we have pumped more money into FY 14 and FY15 budget to increase our readiness levels,“ James added. “I am talking about fully funding flying hours, more money for spare parts and maintenance more money for munitions. These are some of the categories that contribute to readiness.”

James also said fleets of aircraft have to be retired so that money is freed up to put back into future readiness, which includes newer weapon systems.

“Here at Gabreski, you are slated to take possession of modernized C-130Js,” the Secretary said of the aircraft scheduled for the base in 2019. Just two months ago, we ordered the contract for the new rescue helicopter which will help you, again decades into the future, continue to save lives.”

During her explanation of make every dollar count, James, described the need to closely monitor programs to make sure that they do not go over budget.

“There is really a roll for all of us to play in this make every dollar count campaign,” James explained, saying her part includes program review to ensure programs stay on budget and deliver as promised.

She also said Airmen can help make every dollar count by sharing their ideas on the Airmen Powered by Innovation website. These idea will make the Air Force more efficient.

“Bubble up ideas that you have from your perspective,” James said, mentioning that Airmen on the ground typically have cost- and time-saving ideas because they’re the ones doing the mission every day.

So far, 14,000 ideas have been compiled from the website and these ideas are projected to save the Air Force 76 million dollars.

James concluded her speech by sending her gratitude to the 106th members’ personal support systems.

“Our Air Force would not be able to support our critical national and state missions without the ongoing support of your families and your employers,” she said. “Please tell them, from me to you, ‘Thank you.’”