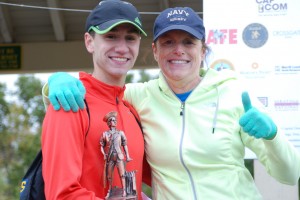 COLONIE, N.Y.Despite high winds and chilly weather, more than 150 capital region residents consisting of New York National Guard members, family members and military supporters alike, participated in the 7th annual Hometown Heroes Run here Oct. 19, 2014. The 5k is sponsored by the New York National Guard Family Readiness Council, a 501 (c)(3) non-profit organization, benefits the families of National Guard service members across the state. The overall winner was Eric Young a resident of Latham, N.Y. “I run to support the cause and also in memory of my uncle Mike,” said Young, who added that his uncle, a Vietnam Veteran had passed away earlier this year. “I just wanted to do this for him.” The Council helps fill the financial void that is often created during periods of service deployments or separations for Citizen Soldiers. Military personnel are routinely supported by the New York State Division of Military and Naval Affairs Family Program; however, as a state agency, they are prohibited from soliciting donations. The 5k draws donations and support from runners, local veteran’s organizations and local businesses. “We’re really grateful to our sponsors this year for showing all of their support,” said Cherie Murphy, the president of the Family Readiness Council. We’re also very excited that despite the weather, we had such a large number of runners who participated.” Members of the National Guard come under unique pressures when they are activated for federal or state duty in times of emergency. Unlike active duty military members, “Citizen Soldiers” do not live on or near military bases that can provide the range of support services to families during periods of separation. All proceeds from the fund raising event go directly to the Council to benefit military families.