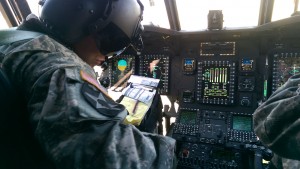 ROCHESTERrdquo;New York Army National Guard aviators here are now operating the Army’s latest and greatest version of the venerable Chinook dual rotor helicopter: the CH-47F. “For the Soldiers it is a very big deal because of all the enhanced capabilities which the aircraft provides which is above and beyond the ‘Delta’ model,” said Capt. Brendan Flansburg, commander of Detachment 1, Company B, 3rd Battalion 126th Aviation, referring to the CH-47D company Soldiers flew during two deployments to Afghanistan. Members of Flansburg’s company spent two months at Hunter Army Airfield in Savannah, Georgia learning to fly the new aircraft. The final flight of three CH-47Fs arrived at the Rochester Army Aviation Support Facility on Wednesday, Oct. 29. Two other aircraft had arrived in single ship flights earlier. This latest version of the Chinookrdquo;the Army’s heavy lift workhorse helicopter since the Vietnam Warrdquo;represents lessons learned in Afghanistan, said Major Eric Fritz, 42nd Infantry Division aviation officer, resident of Webster, N.Y. and a veteran CH-47 pilot. In Afghanistan the CH-47D was indispensible because the twin-rotor helicopter to could operate in high mountain altitudes too high for the UH-60 Blackhawk and deliver up to 30 troops and thousands of pounds of cargo. The CH-47F has been engineered to include improvements designed to make the helicopter more reliable and keep it flying longer. The newest version of the helicopter contains new avionics, a redesigned ramp and rear rotor pylon, and incorporates new countermeasures against ground to air missiles. The fuselage has been redesigned to make it more rugged and corrosion resistant. The new version CH-47 is also designed to make it easier to prepare it for shipment in the fuselage of a C-5 or C-17 cargo plane. Externally the CH-47F looks like a CH-47D, except for a new paint job designed to make the helicopter harder to spot. The big changes are inside the cockpit, said Flansburg, a Delanson, N.Y. resident. The upgraded avionics systems, known as the Common Avionics Architecture System of digital displays and readoutsrdquo;known collectively as a “glass cockpit”rdquo;provides information in a more user friendly system that allows pilots to manage the mission more effectively, Flansburg said. That digital display system was originally only on the ‘G’ model CH-47s used by Special Operations forces, Flansburg said. But it has proven to be so useful that now it is incorporate on the Chinooks flown by all CH-47 units, he said. The CH-47F also incorporates an autopilot system that makes it easier for the pilot to fly the aircraft, hover and land in snow or dust when visibility is low, he added. These changes reduce pilot fatigue. The aircraft’s ability to hover under computer control is a tremendous advantage when it comes to carrying external cargo, Fritz said. It’s a capability that can be useful both in combat and in National Guard missions in the United States in support of local officials, he explained. The computer controlled hover would have made a tricky mission he flew in June 2011, much easier Fritz said. On Father’s Day 2011, Fritz and a CH-47 crew from Rochester were tasked with extracting a broken down power boat from the lip of the American side of Niagara Falls. The New York State Department of Environmental Conservation was concerned that if the heavy abandoned steel boat went over the falls it would cause damage. The New York National Guard aircrew went in to pull the boat out: Fritz had to hover at just above the river while Staff Sgt. James Lentz, the flight engineer, worked to get a hook on the boat as he hung out the hatch on the underside of the aircraft. The computer controlled hover would have made that mission much easier, Fritz said. Another digital system lets the crew chief easily monitor the status of aircraft systems, Flansburg said. Learning to master the new aircraft involved a lot of “drinking through the fire hose” as the pilots and maintenance personnel learned new acronyms and about new systems. Flansburg said. “But we have a group of sharp guys and everybody has caught on in a relatively short period of time,” he said. The New York Army National Guard CH-47 crews in Rochester are part of the 3rd Battalion, 126th Aviation’s Company B which also has elements in Maryland. The unit’s soldiers deployed to Afghanistan in 2007 and 2008 and again in 2012 and 2013. The company was recognized for excellence by the Army Aviation Association of American in 2008 for their service in Afghanistan during the 2007/2008 deployment. In January 2009 the unit’s Chinook aviators conducted a two-week flight training program for Canadian Force CH-47D pilots after Canada bought CH-47s to supply their troops in Afghanistan. Soldiers of Company B also carried priority supplies during the New York National Guard response to Superstorm Sandy in 2012 and to Tropical Storms Lee and Irene in 2011.