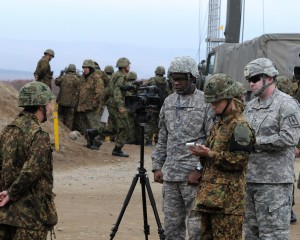 Orient Shield 14 tested the ability of Japanese Ground Self- Defense Force members and American Soldiers from the 2nd Infantry Division at Joint Base Lewis ldquo;McChord, Washington to work together as a team.

The public affairs teamfocused on highlighting the partnership and collaboration between the two forces as they conducted a series of combined light infantry, squad-level training events that included urban assault, building clearing and medical evacuation, to name a few.

The exercise culminated with troops working side-by-side in a scenario-based tactical field training exercise that included an air assault mission.

According to Toner, the mix of public affairs professionals from all branches meant better storytelling.

. Although the team shares common training, their experiences in their respective forces brought different perspectives, he explained.

“Everyone learned new techniques and approaches to telling the Soldier story,” Toner, said.

“It was an amazing experience being able to work with our Japanese counterparts,” said New York Army National Guard photojournalist Spc. Frank Cagnina. “It took us a couple of days to figure out how to communicate and with the help of an interpreter we were very successful.”

“The experience the New York team brought both in print and broadcast capability was more than able to tackle the complexity and challenges of covering an exercise like this,” said Capt. Kenneth Coleman, Public Affairs officer for the 2nd Stryker Brigade Combat Team.

“The amount of work they accomplished and the quality in which they did it was significant,” he added