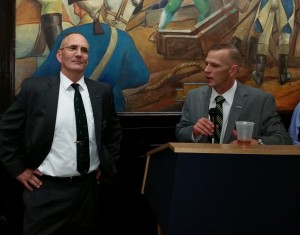 For the first time since 1947, no World War II veterans attended the annual Makin Day Dinner hosted by members and veterans of the 1st Battalion 69th Regiment.

“This is the first year in which we have no World War II members in attendance and you can’t help but wonder how much longer will any of our WWII heroes be around,” said Lt. Col Sean M. Flynn, the Commander of the 1st Battalion, 69th Infantry.

This, Flynn said, marks the passing of one generation of 69th Infantry History to the next.

The dinner, held to commemorate the battalion’s landing on Makin Island on Nov. 20, 1943, is the 69th Infantry’s second most prominent affair following the unit’s participation in the annual New York City St. Patrick’s Day Parade. It featured an unvarying menu of meatballs, sausage, pork and beefsteak that mirrors the meal fed to 69th Soldiers before they hit the Japanese-held beach, prepared by members of the 69th Regiment Veterans Association.

Retired Col. Geoff Slack, who commanded the battalion 10 years ago in Iraq and the former 27th Brigade Combat Team commander, and the keynote speaker at the 2014 dinner, told diners that Makin Day now matters more than ever for the 69th Infantry.

As a young captain attending his first Makin Day Dinner, Slack said, he noticed the quiet nature of the World War I veterans who attended the dinner then, compared with the World War II veterans and their boisterous tales of charging onto Saipan. They were the true legends, and he, like so many other young Soldiers wanted so badly to be a part of that team, Slack said.

The men and women who served in Iraq and Afghanistan have created their own legends but the there will always be something unique about those World War One and Two veterans, Slack said.

“We were not comrades in the mystical way that the world war veterans were,” he emphasized.

Slack recalled a relationship he built with a quiet veteran: Anthony (Tony) Daddato, an optometrist who saw battle during World War II. Slack and Tony Daddato became friends and shared thoughts about men and battle.

It was to Tony Daddato that he confided in before leading the 69th Infantry to Iraq ten years ago, Slack remembered. He talked with Daddato about what battle was like and what death was like.

And it was Tony Daddato he turned to after returning from Iraq without 19 of his men, Slack said. Daddato intercepted him at the 2006 Makin Dinner as he was getting ready to go upstairs for a drink, Slack recalled. He told me I didn’t need another drink, he told me we needed to talk instead, Slack said.

He talked with Daddato about November 2004, when he lost men. It was a month he wished did not exist, Slack said. He talked to Daddato about the casualties and how the toll of their absence impacted all and Daddato understood, Slack added.

He needed that conversation and insight from a veteran of a past war to help him deal with his war, Slack said.

The Soldiers of today’s 69th Infantry need to be ready to be that sounding board for the Soldiers yet to come, Slack said, because the regiment will be called again.

“Don’t shrink away from being someone else’s Tony Daddato because another fight is coming,” Slack said.