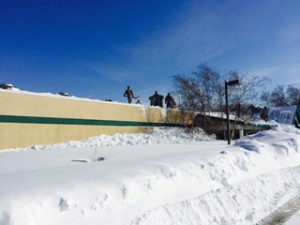 BUFFALO, N.Y. ldquo; For some 375 or so members of the New York National Guard called out to assist in Western New York’s snow emergency, the biggest impression was the stark differences in snowfall across the various locations where lake effect snows from Lake Erie dumped up to six feet of snow.

More than 240 Soldiers and Airmen were initially called out by New York Governor Andrew Cuomo November 18 to assist the City of Buffalo and Erie County in the response to the historic lake effect snowfall. Within 24 hours, that number grew to the 375 expected on duty on November 20.

The storm swept across Lake Erie November 17, creating bands of snowfall familiar to Western New York residents, but dramatic in the amount of snow to pile up in just hours.

“Mother Nature is showing us who’s boss once again,” New York Govervor Andrew Cuomo said in his activation of the state emergency management center in Albany and callup of National Guard forces. “This snowfall may break all sorts of records, and that’s saying something in western New York and in Buffalo.”

Lancaster, New York, just east of the City of Buffalo, recorded more than 5 feet of snow by Nov. 19. But just six miles away, the Buffalo airport, outside the heaviest band of lake effect snow, received less than 4 inches.

“We are deploying the National Guard to ramp up efforts to keep western New York residents safe and to assist storm recovery efforts in any way possible,” Cuomo said. “Travel bans and advisories remain in effect, and I urge drivers to stay off the roads so that our state agencies and the National Guard can assist those that need help.”

The storm forced the state to close the New York State Thruway, Interstate 90, from Rochester all the way west to the Pennsylvania state line. Some 100 cars were reported stranded along that 140 miles highway.

The task force was led by Lt. Col. Jim Freehart, from Troy, N.Y. and commander of the 153rd Troop Command Headquarters, a Buffalo-based Army National Guard unit. Additional staffing for the joint task force came from nearby Niagara Falls in the New York Air National Guard headquarters of the 107th Airlift Wing.

“It was an amazing feeling,” Rene Polka, the director of women’s basketball, told news reporters after the rescue. “It was dark when we first became trapped early Tuesday, but when the sun came up we saw how bad it was. Then it literally did not stop snowing all day, so we thought we might have been trapped for a lot longer.”

The engineers were joined by National Guard Initial Response Forces from the 107th Airlift Wing at Niagara Falls Air Reserve Station and the 642nd Aviation Support Battalion from Rochester. The two units worked throughout the day November 19th to provide traffic control or assist in critical snow removal using a welcome resource of the National Guard: manpower.

Airmen from the 107th Airlift Wing helped clear heavy snows from the roof of the Eden Heights Assisted Living Facility in West Seneca, N.Y., Nov. 19. West Seneca experience more than four feet of snow in just the first 24 hours of the snowstorm.

The New York National Guard doubled those initial response forces during the day on Nov. 19 with the call to two more elements from Syracuse, N.Y.rdquo; the 174th Attack Wing and 27th Brigade Combat Teamrdquo;to deploy and join the task force Thursday and assist as needed.

“We’ve brought in hundreds of National Guard personnel, and we will be bringing in more to impart, supplement, but also to relieve the existing personnel,” Cuomo said in a November 19 press conference. “This is going to be a multi-day event, given the weather pattern, so we’re planning a four/five day workload and we’re adjusting accordingly."

The quick reaction of New York National Guard resources lies primarily in the creation of winter response force packages that each major command resources each year. These packages were then quickly relocated to Western New York to assist local authorities.

Joining that force to assist the Department of Transportation were two Oshkosh Snow Removal Trucks from the 174th Attack Wing along with additional operators from the Air National Guard’s 109th Airlift Wing from Scotia, N.Y. The trucks partnered with local highway department resources with snow removal of key roadways. The Oshkosh H-Series blower vehicle can throw as much as 5,000 tons of snow an hour as far as 200 feet.

More than a dozen support missions were completed for the city and county in the first 36 hours of response, clearing snow from roofs of buildings at risk, removing snow from entrances to disabled home, assisting in the recovery of stranded motorists, providing traffic control to law enforcement to keep vehicles from closed roads and highways and assisting in the large-scale clearance of vast amounts of snow to create access for first responders.

“We’ve focused a lot of our efforts on the City of Buffalo, providing five bucket loaders and ten dump trucks to assist in snow removal,” said Maj. Gen. Patrick Murphy, The Adjutant General for New York, “as well as providing support to life and safety issues, using our vehicles to help transport medical personnel, where we have healthcare workers, nurses, who need assistance getting to area medical facilities, like the Erie County Medical Center.”

With weather forecasts showing continued snowfall through Friday, and a warming trend through the weekend that highlight flooding concerns, the New York National Guard expects to maintain a strong presence in the Erie County Emergency Management Office.

“As I said, it is going to be several days and we have a couple of challenges before the day is over; but we’ve done our homework, we have the preparations, we have the team, we have local leaders who are doing a great job, so at the end of the day we will overcome,” Cuomo said. “But it’s going to be a long day."