June 24, 2021 | 2:15 pm COVID-19 Updates
The COVID-19 vaccine is here. It is safe, effective and free. Walk in to get vaccinated at sites across the state. Continue to mask up and stay distant where directed.
Get the Facts 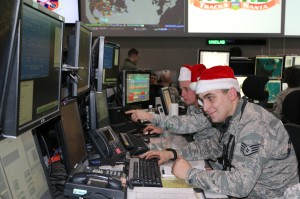 "NORAD has supported Santa Claus’ Christmas Eve operations for more than 50 years and we are always delighted to help," said Col. Michael J. Norton, EADS commander. "I can assure everyone that EADS will do everything in its power to assist Santa with his critical mission."

EADS’ Sector Operations Control Center (SOCC) will monitor Santa constantly as he travels across the eastern U.S. delivering toys and gifts. These activities are in support of the NORAD Tracks Santa Operations Center at Peterson Air Force Base, Colo., which leads the Santa monitoring effort.

NORAD starts its Santa tracking operation at 5 a.m. EST on Dec. 24. Children and parents can call the NORAD operations floor at 1-877-446-6723 for live updates on Santa or track Santa on the web at www.noradsanta.org. The operations floor can also be contacted via e-mail at noradtrackssanta@outlook.com.

Broadcasters interested in B-roll, video or audio downloads, or historical footage can contact the Digital Video and Imagery Distribution System at NORADTracksSanta@dvidshub.net.

The Santa tracking tradition started in 1955, when a Colorado Springs, Colorado Sears Roebuck & Co. advertisement encouraging local children to call Santa listed an incorrect phone number. Instead of reaching Santa, the phone number went into to the Continental Air Defense Command’s operations hotline. Col. Harry Shoup, the operations director, had his staff check the radar for indications of Santa making his way south from the North Pole. Children who called were given location updates and a tradition was born.

In 1958, the governments of Canada and the United States created the bi-national air defense command North American Aerospace Defense Command (NORAD), which then took on the tradition of tracking Santa.

The Eastern Air Defense Sector is headquartered at Griffiss Business and Technology Park in Rome. Staffed by active-duty New York Air National Guardsmen and a Canadian Forces detachment, the unit supports the North American Aerospace Defense Command’s (NORAD) integrated warning and attack assessment missions and the U.S. Northern Command’s (USNORTHCOM) homeland defense mission. EADS is responsible for air sovereignty and counter-air operations over the eastern United States and directs a variety of assets to defend one million square miles of land and sea.