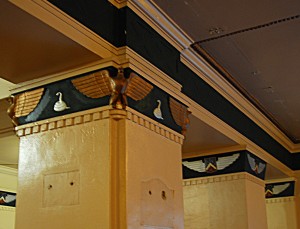 These pillars in the main entry way of the New York Army National Guard’s historic Harlem Armory in New York City feature the federal eagle typical of 1930’s-era government architecture and the rattlesnake crest of the 369th Infantry. While popularly known as the Harlem Hell Fighters, the African-American National Guard regiment officials called themselves the "Rattlers" and adopted the rattle snake as their unit symbol. Historic details like this will be preserved during a two-year, $42 million renovation project now underway. (U.S. Army National Guard photo by Major Al Phillips/Released)

NEW YORK - The New York National Guard’s Harlem Armory, which looks like a castle on the banks of the East River, is getting a $42 million upgrade over the next two years. Built to house the historic 369th Infantry rdquo; the African-American infantry unit which distinguished itself in France in World War I rdquo; the 80-year-old Art Deco building is in need of repairs. In some places paint is peeling from water damaged ceilings and windows are cracked and broken. The building is now the home of the 369th Sustainment Brigade, which traces its lineage to the original “Harlem Hell Fighters.” Ongoing renovations will update the building while maintaining its historic character, said Lt. Col. Scott Cleaveland, the New York State Division of Naval and Military Affairs facilities project officer overseeing the project.

"This project adds modern offices, classrooms, dining areas, and all the things we would see in an active duty installation while maintaining the building’s historical elements," Cleaveland said. The $42 million project began late September 2014, and is scheduled to be completed in the fall of 2016.

The massive red brick building, built in two parts in the early 1920s and 1930s rdquo; the drill shed first and then the administrative areas rdquo; will be updated to modern standards.

The 60 bathrooms and locker rooms, which sporadically worked and were scattered throughout, will be placed in centralized locations on each floor. The old system of cast iron radiators for heat and air conditioners in the windows, will be replaced by a modern heating, ventilation and cooling system system. The dining facility, with its painted concrete floor, will now have a new tile floor, a new range hood and space for a serving line.

The building will have sprinklers in case of fires and a more energy-efficient lighting system. Walls will be demolished for an open-office layout that encourages collaboration.

"I think from the unit perspective, the importance of preserving the building would be to display the history of the unit, building the esprit de corps," Gonyo said. "It gives us a reflection back into the past. It makes soldiers aware and proud of the patch that they’re wearing." The 369th became famous during World War 1 rdquo; when its Soldiers received 171 medals for valor rdquo; and fought in World War II, Iraq and Afghanistan.

Since then, Soldiers from the 369th Sustainment Brigade have been involved in joint exercises in Africa and responded to state emergencies. During the New York National Guard’s response to Superstorm Sandy in October and November 2012, the 369th Sustainment Brigade played a key role in delivering relief supplies across New York City. Renovations will make the armory more adaptable in future missions, Cleaveland said. The building will receive a simulated firing range, a new telecommunications system, and two generators placed on the rooftop.

"During Hurricane Sandy, the armory flooded a bit," Cleaveland said. "There were times when the power went off. Did the building function? Yes, but once we’re done with the project it will be able to function at a higher level because of the generators." The facility is now is mostly empty, save for construction crews, as Soldiers in the 369th have moved to temporary headquarters in Camp Smith Training Site, outside Peekskill, N.Y.

When they return, they will arrive to a modern armory, said Marcus Lafond, a civilian project manager assisting DMNA.

"The idea is to get the facility into the next century," Lafond said. "It will be a healthier place to work. The most important thing is it’s being updated and modernized, so it’s a more pleasant, efficient and productive space for Soldiers to work in."