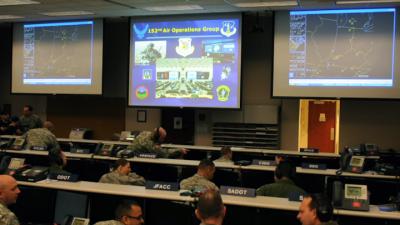 New York Air National Guard members of the 152d Air Operations Group (AOG) spent nine days honing their warfighting skills while participating in the first ever Virtual Flag exercise Feb. 18-26. Exercise Virtual Flag allowed members of the 152nd AOG, whose members are trained to plan and execute air operations plans, to work with other units using computer link ups and a shared virtual training environment. The exercise played an important role in supporting the unit’s combat mission readiness while also giving airmen the opportunity to train alongside their active duty counterparts, said Col. Michael Comella, the commander of the 152nd.

“We capitalized on this “distributed operations” training event to hone our skills and to practice tactics, techniques, and procedures,” Comella said. “We were able to host the Air Operations Center (AOC), which provides operational-level command and control or air, space, and cyberspace operations, from Hancock Field while also being connected to other exercise elements across three continents.”

The exercise was a total force and joint training experience in which airmen from Hancock Field interacted with their active duty partners from the 603rd Air Operations Center at Ramstein Air Base, Germany as well as a variety of Air Force Reserve Command (AFRC), Air National Guard (ANG) and U.S. Army personnel from across the United States.

“This training is extremely important as it opens a dialogue with other components and allows us to understand how all of the “pieces” fit together,” said Col. Brian Van Kouwenberg, director of operations for the 152nd. “It also facilitates brainstorming in a joint environment to minimize degraded operations.”

“It is important for our airmen to understand how the other components, divisions work and contribute to the success of an operation,” Van Kouwenberg said. “The exercise gave us the ability to ask questions, come up with creative solutions and cement techniques, tactics and procedures with those we will go to combat with.”

A large part of the exercise’s setup and management was supported by the Air Force’s Distributed Mission Operations Center (DIMOC). The center is located at Kirtland Air Force Base, N.M., and it distributes combat training exercises and testing. Airmen can practice tactics and procedures under realistic threat scenarios through input received from the center’s integrated and constructed simulations. The most exciting part of the exercise is that the 152nd members, who are in charge of executing the air battle plan, are working with real flight crew members who are ‘flying’ the mission in a simulator from their home base, Comella, said. For Staff Sgt. Daniel Hereth, the exercise was “a great opportunity for me to gain real world experience and observe how different units are able to interact with each other.”