Chairman of the Joint Chiefs Spends St. Patrick’s Day with the Fighting 69th 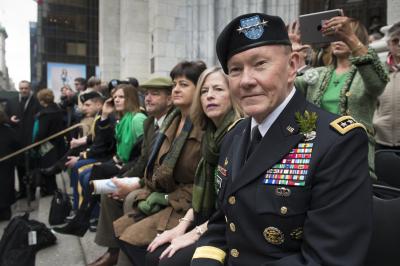 NEW YORK- General Martin E. Dempsey, Chairman of the Joint Chiefs of Staff, and a honorary member of the 69th Infantry, sports the traditional sprig of boxwood worn by members of the 69th to mark their Irish Heritage during the St. Patrick’s Day Parade, as he watches the parade from the reviewing stand on Tuesday, March 17, 2015. The 69th Infantry led the parade for the 164th time that day.( DoD photo by D. Myles Cullen)

General Martin E. Dempsey, the Chairman of the Joint Chiefs of Staff, recognized families of the battalion’s fallen, acclaimed its outstanding Soldiers, and added a line to the song “The Fighting 69th,” praising their service in Iraq and Afghanistan.

Dempsey praised the families of seven of the 23 Soldiers killed while serving with the battalion since Sept. 11, 2001, who were honored during the event.

“Thank you for going through your own grief, and then coming back to help us remember what’s important,” Dempsey said. “We’re proud of you.”

Several Soldiers were also recognized for their long and faithful service to the 69th Infantry.

“You are what makes America,” Dempsey told them “I can’t find another group like this on the face of the earth; whenever the nation needs you you’re there.”

Dempsey capped his appearance by leading the National Guard Soldiers in singing the song “The Fighting 69th.”

The tune was originally written to commemorate the unit’s leadership and actions during the Civil War. Dempsey added a last line to the song to commemorate the service of the battalion and its Soldiers in Iraq in 2004/2005 and in Afghanistan

“We remain on watch for our country with courage and renown. We clear the way for the nation on any battle ground,” Dempsey sang.

“We added to our history in Iraq and Afghanistan and we’re proud to wear the stars and stripes when the wolf hounds ride again,” he added.

This was the 164th time the 69th Infantry had led the world’s biggest St. Patrick’s Day parade.

This year also marked the 10th anniversary of the regiment’s service in Iraq. “These occasions are important, not only because it gives us the opportunity to remember the Soldiers and families who have given so much, but to leverage the experience we have gained to make our battalion better,” said Lt. Col Sean Flynn, the battalion’s commander.

The battalion lost a total of 19 Soldiers during their first deployment from 2004 to 2005 in Baghdad. This included eight members from the Louisiana National Guard’s Company C, 2nd Battalion, 156th Infantry. Four more Soldiers lost their lives in Afghanistan in 2008.

This year, Soldiers marched in Army Service Uniforms and black berets, with one squad marching in full “battle rattle” to show parade onlookers what infantry Soldiers have to wear when they are in a combat environment.

Following the parade up Fifth Avenue, Soldiers from the regiment took a special subway train back to their armory at Lexington Ave. armory where the special ceremony was held.

The ceremony was also attended by Major General Patrick A. Murphy the Adjutant General for the State of New York, and 42nd Infantry Division leaders. Murphy also joined the Soldiers of the 69th during the march.