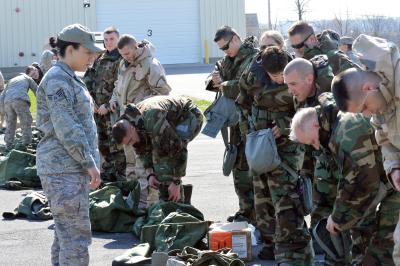 The mass training began in the Dining Facility as trainees got a refresher on Chemical Biological Radiological and Nuclear ( CBRN) skills and first aid training, known as Self-Aid Buddy Care, or SABC.

During the SABC briefing, the instructors played out a scene of a combat situation demonstrating how effective SABC can save a life. The Airmen were then broken up in two groups as half headed over to don their chemical gear and the other half went to put their SABC skills to the test.

Ancillary training are the skills all Airmen need to know but which are not directly connected to their jobs. During the “rodeo’ Airmen moved from station-to-station to hone their skills.

"Being able to be hands on can help young Airmen to remember these kinds of things if they ever deploy and a real-world combat situation happens," Winters said. "This type of training will be very beneficial to them as well as just being able to know what (you need to do) in a time of need."

"(Senior Master Sgt. Joseph) O’Connor and myself have met a good 30 times to go over this," said Master Sgt. Candace Stefanik, 109th AW SABC adviser, on the planning that went into the rodeo. "We’re getting a lot of training done in one day, and making sure everyone is really comfortable with the hands-on portion of the SABC is very important."

During the hands-on portion of the CBRN training, Airmen started off with donning their mission-oriented protective posture gear as instructors went around to ensure gear was on correctly and done in a timely manner.

"We’re teaching all these Airmen how to survive in a chemical, biological, radiological, nuclear and high-yield explosive environment," said Airman 1st Class Rafael Lopez, CBRN instructor with the 109th Civil Engineer Squadron’s emergency management office. "People haven’t been in these suits in a long time, but after running them through drills and getting them going, people were catching on, helping out and having fun."

After donning their gear a few times, Airmen went to different stations to get instruction on things like M295, M9, zone transition points, post-attack reconnaissance, equipment checks and more.

Staff Sgt. Kathleen Gregory, of the 139th Airlift Squadron’s loadmaster section, said she’s done hands-on CBRN training before and it was very hectic. "This was very organized, and I really like how everything’s been going."

"It’s good training," said Airman Bradford Jollie, 109th Logistics Readiness Squadron. "It’s good that everyone’s getting out here and getting it done. After a couple times, it becomes very easy."

"Units throughout New York are just starting to do (the rodeo training) for the first time, and this is the first time we’ve done this. This event started being planned back in the fall so it’s been a long time coming and a lot of planning has gone into it. "

O’Connor said they received support from around the wing to make the rodeo happen, and things went even better than expected.

"We built time into our schedule in case there were glitches, but we didn’t need it and we’re finishing up earlier than expected," he said. "My overall impression is that today went very well, and I’m just hoping the trainees feel the same way."

More ancillary training rodeos will be held in the future, as all Airmen on base are required to be trained within three years.