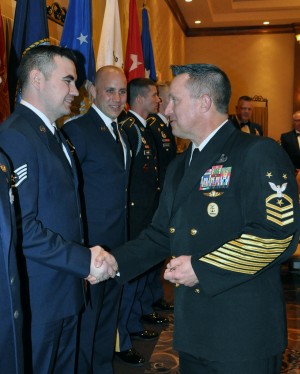 More than 120 members of the Association and guests joined Wicks in congratulating the honorees during the annual dinner.

The top enlisted leader of the North American Aerospace Defense Command and U.S. Northern Command, a guest at the banquet praised the six Airmen and two soldiers for their achievements.

“I am honored to be here to meet these exceptional Soldiers and Airmen,” said Navy Fleet Master Chief Terrence I. Molidor.

Molidor is the senior enlisted advisor to Admiral Bill Gortney, the commander of NORTHCOM, headquartered at Peterson Air Force Base, CO.

“NORTHCOM is tasked to defend the homeland and we rely on the National Guard to provide the support to our civil authorities. The bottom line is ldquo; when the American people are looking to someone in uniform to help them during an emergency - or shelter them in need, it’s the National Guard they turn to,” Molidor said.

Top enlisted members recognized by the Enlisted Association are:

The Enlisted Association, a non-profit organization dedicated to promoting the status, welfare, and professionalism of all members of the State’s organized militia, also recognized their annual education award recipients during the dinner. Cash awards are granted to members and family to be used towards continued education. This year, the association presented a total of $7,500 to 12 recipients.

“Honoring our outstanding enlisted members and presenting our education awards is the highlight of the evening,” said Wicks. “We get to recognize the exceptional achievements of our members and help the next generation achieve their dreams.”