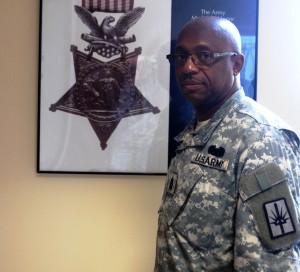 LATHAM, N.Y.--New York Army National Guardsman Louis Wilson has done a lot in a 39-year career. The retired Rochester, N.Y. police officer has been the top NCO at the section, platoon, battery, battalion, brigade and general officer command level, and since 2014 the Command Sergeant Major of the New York National Guard. He deployed to Kuwait and Iraq as brigade command sergeant major in 2004/2005 and responded to countless floods and snowstorms, and the attack on the World Trade Center in 2001.

On June 2 he’ll receive the Medal of Honor on behalf of Sgt. Henry Johnson, a New York Army Guard Soldier who distinguished himself in World War I but died in relative obscurity in 1929.

Since Johnson has no living relatives, Wilson will receive Johnson’s medal from President Barack Obama during a ceremony at the White House.

“I am excited, happy, that I am the person selected for this to represent the Soldiers and especially the enlisted corps for this. To receive this honor on his behalf from the president,” Wilson said.

Like hundreds of thousands of other Americans that spring, 20-year old Henry Johnson, a baggage handler at the Albany train station, wanted to serve his country, which had entered World War I. But Johnson was African-American and could only join the relatively few all black units that served in a segregated Army.

So he traveled to Brooklyn in June of 1917 and enlisted in Company C of the 15th Regiment of the New York National Guard.

Organized in 1913 and based in Harlem, the 15th New York National Guard, was what was then known as a “colored regiment”. In July 1917 the 15th New York and by 1918 it was in France, renumbered as the 369th Infantry Regiment.

But the U.S. Army didn’t trust the black Soldiers. They were assigned to logistics duties instead of being trained to fight in the trenches. But the French Army--whose African colonial troops had been fighting since 1914--didn’t care about skin color. The 369th Infantry as loaned to the French, who were desperate for fresh troops in the face of renewed German attacks.

The 369th Infantry traded their American rifles and helmets for French rifles and helmets and went into the French trench line facing German troops. On May 14, 1918, Johnson and Private Needham Roberts were on outpost duty when a German raiding part of as many as 24 men attacked them. It was standard German practice to capture prisoners for intelligence gathering purposes. Johnson and Roberts stood their ground. When Roberts was wounded Johnson continued fighting with his rifle, a knife, and even bare fists: killing at least four of the Germans--including one with the knife--and wounding the others. The French Army gave Johnson the Croix de Guerre with palm. His own Army gave him nothing, although former President Theodore Roosevelt lauded him as “one of the five bravest American Soldiers of the war.” Johnson was written about in the newspapers and then forgotten.

But in the 1990s a campaign began to have the Army relook at Johnson’s case. In 2003 he was posthumously awarded the Distinguished Service Cross. Another look at his record and relevant documents resulted in the decision to present the Medal of Honor. The opportunity to represent Henry Johnson , the New York Army National Guard and the Army at the White House ceremony is tremendous, Wilson said. “With Sgt. Johnson I can equate that he was a New York National Guard Soldier and, in a way, I am his command sergeant major,” Johnson said. “ I have been thinking about that a lot lately.” He also feels a special connection to Johnson because they share the common bond of being African-American as well as being National Guard Soldiers, Wilson said. “ But unlike his day in which he was never recognized, today we are recognized,” Wilson said. “ He paved the way for African American Soldiers.” “Where they served in segregated units today we fight side-by-side as a team,” he added. Like Johnson he served in a combat zone, and like Johnson he traveled from his home city�rdquo;in his case Rochester and in Johnson’s case Albany�rdquo;in order to serve. Although he lived and worked in Rochester he served in units located across the state of New York during his career, Wilson said. “ In his attitude of him wanting to serve his country, it feels the same way I do because I wanted to serve,” Wilson added. As a Rochester native, he never thought too much about Henry Johnson, Wilson said. But when he moved to the Albany, N.Y. to take on his current duties that changed, Wilson said. In Albany people drive along Henry Johnson Boulevard and in Albany’s Washington Park there is a bust of Henry Johnson. Children attend Henry Johnson Charter School. The story of the effort to have the Medal of Honor awarded to Johnson was front page news. “People talk about him all the time,” Wilson said. He learned more about Johnson and that makes the honor of standing in for him at the White House event more awe inspiring, Wilson explained. One image of Johnson, in particular, sticks out in his mind, Wilson said.

In the photograph, taken after the 369th returned to New York in 1919, Johnson is standing in uniform with his Croix de Guerre and other ribbons pinned on and displaying a wide smile. “I wonder how he felt at that time,” Wilson said. “He went through a horrific fight, for the life of himself and his battle buddy and to see him afterwards wearing those medals, I wonder how he felt. It gives me a sense of wonder. It makes me say wow.”