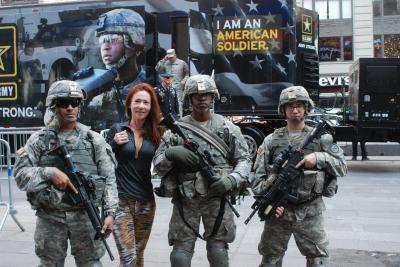 NEW YORK--The 3rd Infantry’s Fife and Drum Corps performed, the U.S. Military Band played, the Chief of Staff of the Army cut a birthday cake, and members of the 1st Battalion 69th Infantry talked about weapons, and what Soldiers do, as the Army celebrated birthday 240 in Times Square on Friday, June 12.

Twelve New York Army National Guard Soldiers from the 69th’s Headquarters Company were part of the pageantry as the Army pulled out all stops for a glitzy event at New York City’s crossroads. “It’s nice to see civilians-- New Yorkers and tourists--interested in what we do and how our equipments and weapons are used,“ said Sgt. Nicholas Poppalardo.

The 120mm mortar the Guard Soldiers had on display was a big hit, and passersby approached the 69th Infantry members to ask questions and pose for countless pictures.

Manhattan resident Sandy Rivera, who visited the event to try to convince her teenage son to enlist in the Army National Guard said she was glad to see the turnout.

“I think this is great for the New York City as a whole, to see that the military is here and that they too can join the service, “ Rivera said.

Spc. Michael John, the 69th Infantry’s Soldier of the Year, took part in the ceremonial Army Birthday cake cutting with General Raymond Odierno, the Chief of Staff of the Army.

This is the second year 69th Infantry Soldiers have been part of Army Birthday events in New York City, mounting an exhibit of weapons and equipment.

The theme for this year’s Army Birthday, Odierno said, was selfless service to the nation.

“On our Army’s 240th Birthday, we remember who we are, Soldiers ,“America’s trusted professionals,” Odierno emphasized.

"Today is about the long line of people, the millions upon millions of men and women who have served the nation wearing this uniform from 1775 until today," Odierno said.

The celebration included the U.S. Army band Downrange along with the West Point band, drill teams, the enlistment of 48 new Soldiers and the American Soldier Adventure Semi, which featured interactive displays, weapon simulators, and equipment and gear.

Taking part in the Army Birthday event is good for the 69th, said Lt. Col. Sean Flynn, the battalion commander.

New York City is the 69th’s hometown so it’s a great chance for local Soldiers to talk about their service in the Army and in the National Guard, Flynn said.