July 30, 2021 | 3:15 pm COVID-19 Updates
Unvaccinated individuals are at greater risk of serious illness from COVID-19. Learn more about the COVID-19 vaccines.
Get the Facts 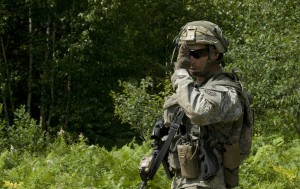 FORT DRUM, N.Y. ‚Ä“ An Infantrymn with Company C, 1st Battalion, 69th Infantry Regiment, signals Soldiers forward during a platoon combat training exercise at Fort Drum, N.Y. July 23. The unit is preparing, along with the rest of the 27th IBCT, for its rotation at the Joint Readiness Training Center at Fort Polk, La. scheduled for next summer (U.S. Army National Guard Photo by Spc. Alexander Rector/released).

Atop the ridgeline in the midst of green smoke and some 800 meters away from the infantry Soldiers, the mortar team from Company C are poised ready with two M-224 mortar launchers.

‚ÄúThe mortar is the most casualty producing weapon,‚Äù said Staff Sgt. Jamah Figaro a mortar team non-commissioned officer in charge, as he prepared to support the infantrymen.

The platoon moved through the attack exercise and snaked through various breech points after exiting the woods and maneuvering past the razor-sharp concertina wire. The drill, a highlight of the nearly month-long Exportable Combat Training Capability (XCTC) exercise here, occurred again and again, allowing the Soldiers of the ‚ÄúFighting 69th‚Äù to sharpen their basic infantry skills.

Each day they slept in the field and began training at six a.m.

‚ÄúThis is one of the best resourced training events we‚Äôve been fortunate enough to participate in for quite some time,‚Äù said Lt. Col. Sean Flynn, the battalion commander of the battalion, which is headquartered on Manhattan but has units on Long Island and in the Hudson Valley as well.

Simulated casualties were mounting, this day, as Flynn and Charlie Company‚Äôs First Sergeant Sean Goodridge watched their Soldiers continue on the the final breech point in the platoon attack scenarios.

The XCTC has brought the units within the battalion together to perfect the skills of each soldier by conducting infantry tactics, live fire exercises and roving lane missions.

The training being conducted by the 69th and the rest of the units within the 27th Infantry Brigade Combat Team was designed to prepare the brigade for their upcoming rotation at the Joint Readiness Training Center (JRTC) in 2016. JRTC is one of the Army‚Äôs three combat training centers and is considered the ‚ÄúSuper Bowl‚Äù of Army training.