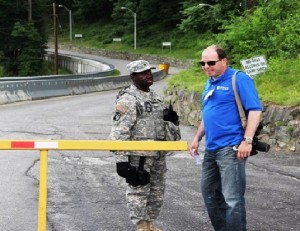 “Informing our local residents through the press is an integral part of our emergency plan. So it makes sense to test our media plan and make changes if needed,” said Lt. Col. Joseph Cetta, Camp Smith Training Site Garrison Commander.

“The New York Guard Public Affairs team played a key role by asking the kinds of questions real reporters would ask in an emergency." he added.

Rehearsing the emergency procedures of Camp Smith personnel with their local first responders is crucial to the safety of everyone who trains at the installation, Cetta said. Part of that training is understanding the important role that information plays in communicating with the local community and the National Guard members, he added